June 14, 2022 Liz Ann SondersKevin Gordon
Rising inflation, rate hikes, supply-chain problems and the Russia-Ukraine war have contributed to growing recession fears. While recessions are impossible to predict, we think the risk of one—sooner rather than later—has picked up. 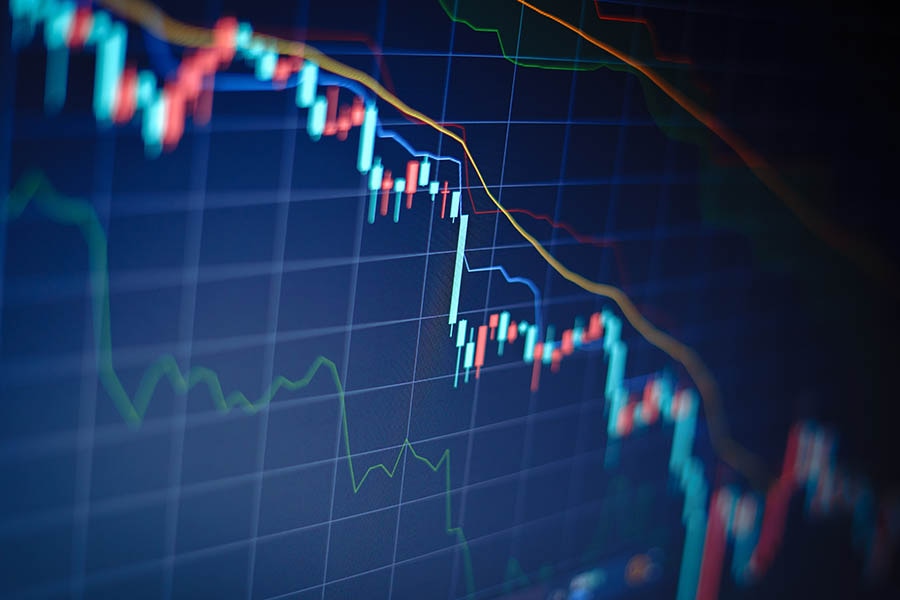 Recession fear has risen swiftly this year. Inflation is rising at its fastest pace in decades, the Federal Reserve has begun what is expected to be an aggressive rate-hike cycle, global supply-chain problems persist, and the Russia-Ukraine war has upended commodity markets. All this has driven a rise in market volatility and fear of a coming economic downturn.

We think the risk of a recession—sooner rather than later—has picked up. Intense market volatility, sour consumer confidence, and downward pressure on income growth all point to an economy that is slowing down. U.S. gross domestic product growth (GDP) contracted at a 1.5% annualized rate in the first quarter of 2022 (note that early GDP data is always subject to revision in later quarters). That was the first decline since the second quarter of 2020. While the trade and inventory components were largely responsible for the negative figure, the trend in consumer spending (which makes up about 70% of the U.S. economy) slowed throughout the quarter.

What a recession is (and isn't)

The official arbiter of U.S. recessions is the National Bureau of Economic Research (NBER), which defines recession as "a significant decline in economic activity that is spread across the economy and that lasts more than a few months." The four primary components that the NBER looks at to determine whether the United States is in a recession are—not coincidentally—the four indicators that make up The Conference Board’s Coincident Economic Index (CEI):

As you can see in the chart below, the CEI tends to track the business cycle in real time, peaking at the start of recessions and finding a trough at the end of them.

Recessions are not a matter of "if" but simply a matter of "when." News media often portray them as a catastrophe, but the reality is every economic cycle ends in a recession, allowing any excesses to be wrung out and thus making way for the start of a new cycle. To be sure, investors' muscle memory of the past couple recessions paints them in a rather unpleasant light: Both the COVID-19 pandemic in 2020 and the global financial crisis in 2007-2008 sent shockwaves throughout world asset markets and spawned multiple, lasting crises (different in nature, of course).

Barring some exogenous, unexpected event that sends yet another shock through the global system, we think the next recession will be a bit more (for lack of a better term) natural: The Fed hikes rates—sometimes aggressively—to combat inflation and/or growth that’s overheating, unemployment increases, the labor market weakens, incomes fall, and overall growth slows.

Look to the leaders

At any point in the cycle—and especially when a recession is on the horizon—it is useful to analyze leading economic indicators for clues as to where the economy is headed. The Leading Economic Index (LEI) from The Conference Board is an amalgamation of key indicators that move in advance of the business cycle. Covering the labor market, stock prices, and consumer/business confidence, among others, the LEI’s level and trend are perhaps the best indications of both the strength and durability of the phases of the cycle.

Whenever discussing the LEI, we always like to remind investors that the indicators' trends are just as important—if not more important—than their levels. Individual components shouldn't be looked at in isolation, and their strength in level terms often isn't enough for a comprehensive analysis of inflection points, even in the run-up to recessions. As an example, below are snapshots of the LEI's level and trend in the months prior to the start of the 2020, 2007, and 2001 recessions.

Starting with the pandemic-driven recession in 2020, you can see in the first table below that most indicators were at either strong or fair levels. Given the rapidity with which the virus drove the world into a recession, trends within the LEI's components were not particularly weak—but to be sure, there was more red and yellow in the trend column vs. the level column. 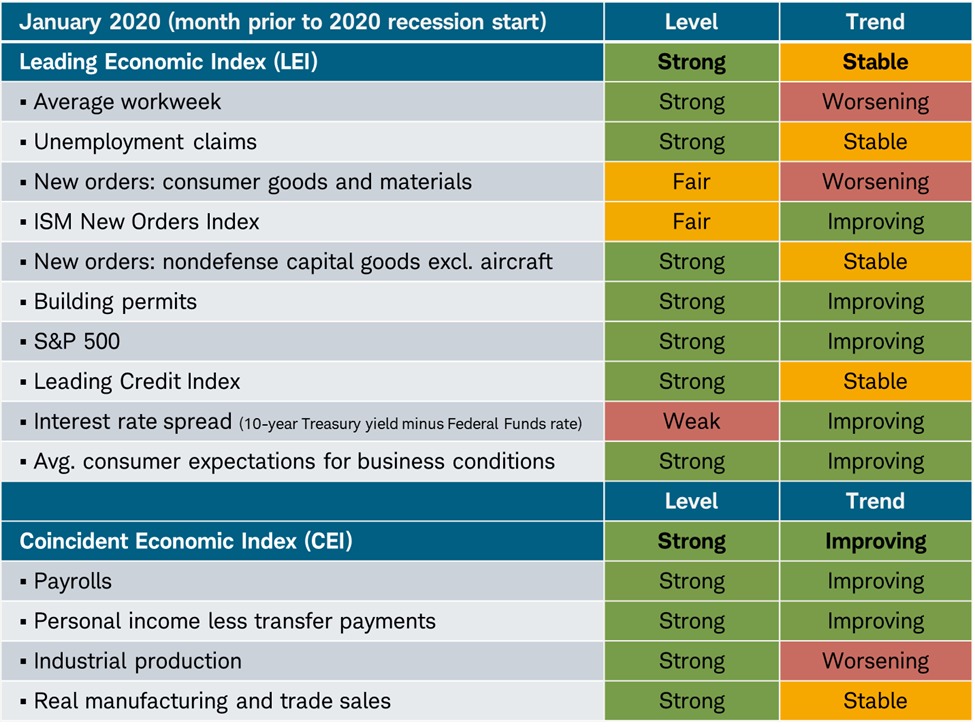 Moving to the recession that started in 2007—famously sparked by the bursting of the subprime mortgage bubble—you can see below that trends were in worse shape—and unsurprisingly, housing activity (as reflected in building permits) had already started to weaken considerably. It was the labor and business spending areas that took a bit longer to catch up. 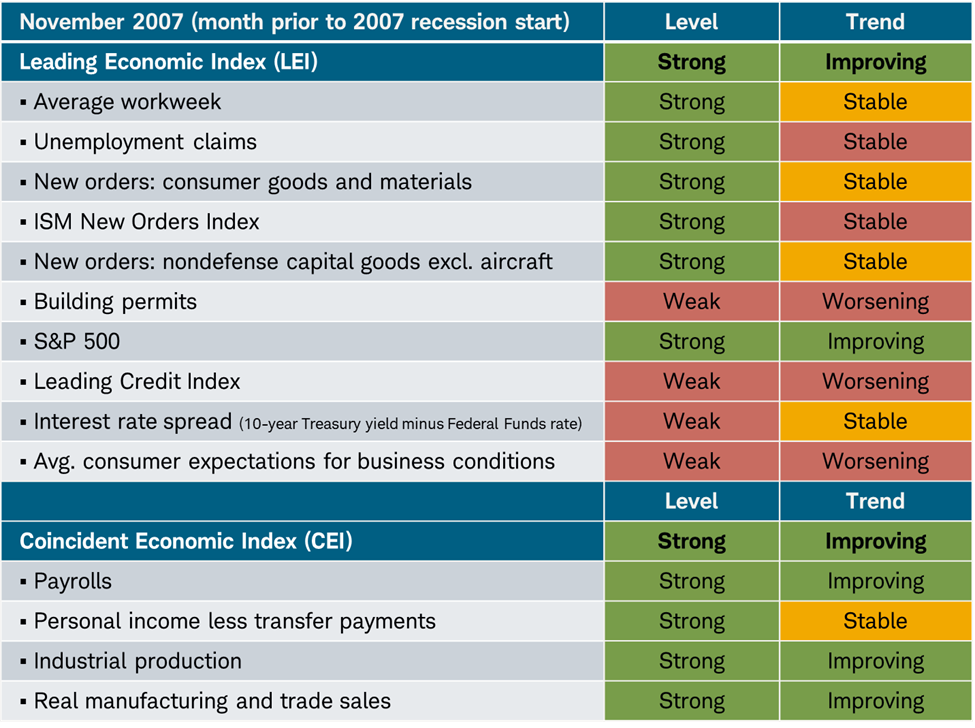 Meanwhile, prior to the 2001 recession, the LEI's trend column was almost a complete sea of red, as you can see in the table below. Not only that, but even the levels were in rough shape, with only building permits showing any degree of strength. Arguably, the chief reason for the souring economic data in advance of the start of the recession was the collapse in the stock market, courtesy of the bursting of the tech and telecom bubble that started in March 2000. From the peak in March 2000 through February 2001, the S&P 500 was down 17% and the Nasdaq was down 57% (of course, suffering even greater drawdowns until late 2002). Given households' historic exposure to stocks at the time, hits to confidence through the asset market channel were large enough to help accelerate the economy’s downturn. 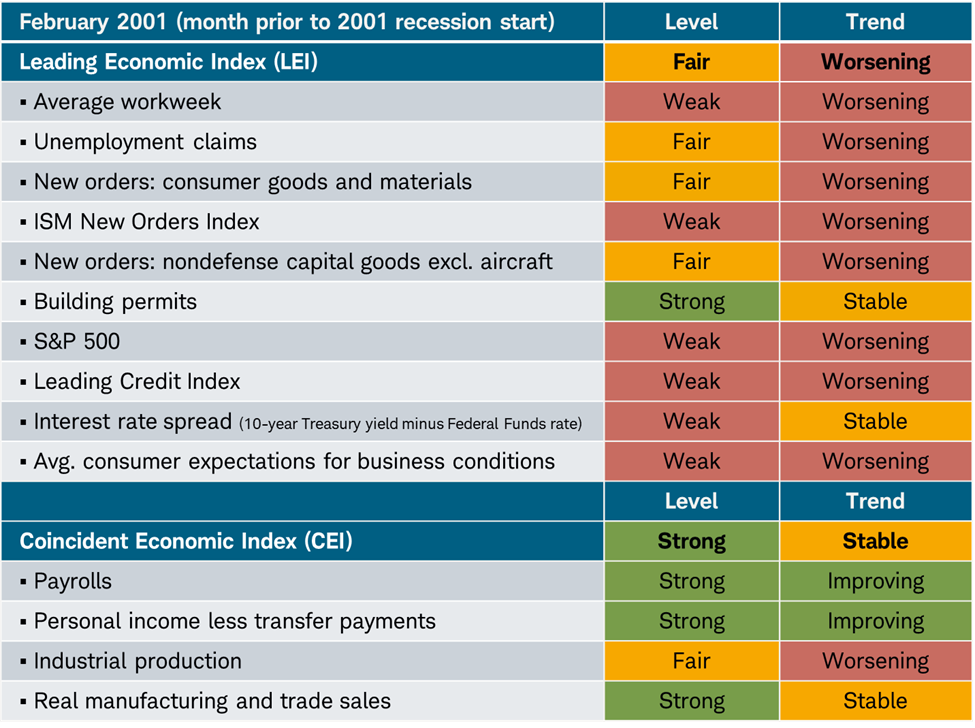 A market-driven downturn has the potential to take shape, mostly due to the near-historic interconnectedness between the economy and the stock market. As you can see in the chart below, the value of corporate equities relative to U.S. GDP (known as the "Buffett Indicator" given its historical status as one of investor Warren Buffett's favorite valuation metrics) is well over 200%, slightly off its all-time high but incredibly stretched relative to history.

Stocks tied to the economy

The Buffett indicator—along with other valuation metrics—is often used to argue that stocks are egregiously overvalued and due for an imminent downturn, particularly by market watchers who are bearish to begin with. While the drop in valuations and weak performance this year have confirmed both assertions, we'd emphasize that there is more to glean from looking at households' exposure to the overall stock market. Put simply, given the Buffett Indicator's 200%-plus reading and households' outsized exposure to equities, there is a heightened degree of risk that if the bear market is deep and long-lasting, it may deal a greater hit to the economy by discouraging consumer confidence and spending.

It also doesn't bode well for stock market performance. As you can see in the chart below, high allocations to stocks (at extremes) historically have tended to lead to weak returns in the subsequent 10 years (shown by the yellow line).

©Copyright 2022 Ned Davis Research, Inc. Further distribution prohibited without prior permission. All Rights Reserved. See NDR Disclaimer at www.ndr.com/terms-of-service. For data vendor disclaimers see www.ndr.com/vendor-info. Equity allocation (includes mutual funds and pension funds) is % of total equites, bonds and cash. Indexes are unmanaged, do not incur management fees, costs and expenses, and cannot be invested in directly. Past performance is no guarantee of future results.

Of course, one indicator isn't the sole determinant or predictor of the path stocks end up taking, but investors should note that both the market and economy face an increasingly steep uphill climb in the near term. Fiscal and monetary policy are no longer stimulative, the world continues to struggle from rising interest rates and supply shocks, and pervasive inflation is actively denting income growth and spending power.

Along with the strength in the aforementioned leading indicators, investors should continue to take note of the energy sphere, as the spike in commodity prices this year has been consistent with prior recessions. As you can see in the chart below, inflation-adjusted crude oil prices have climbed well beyond their 24-month moving average; going back to the early-1970s, it's been quite common for a recession to follow such a price rise. Only once (in August 2005) did the change move above 50% without a recession on its way (or already underway).

Y-axis is truncated for visual purposes; the actual peak was 242%.

Energy spending as a share of overall U.S. consumption has waned over time, but the unfortunate reality is that higher oil and gasoline prices act as a regressive tax—especially for those on the lower end of the wealth and income spectrum. At a time when inflation is running hot and asset markets are under pressure, a jump in commodity prices can depress consumer confidence and lead to lower spending.

Despite the drop in consumer confidence and bearishness across survey data, consumer spending has held up so far this year, and the broader economy remains on solid footing in level terms. However, trends among leading economic indicators are crucial to watch, especially when approaching inflection points in the cycle. Put another way, we'll emphasize our oft-used phrase: When it comes to the relationship between the stock market and economic data, "better" or "worse" tend to matter more than "good" or "bad."

U.S. stocks are continuing yesterday's rally that came as the Fed hiked rates by a decelerated amount and suggested that it may be nearing the end of its tightening cycle. 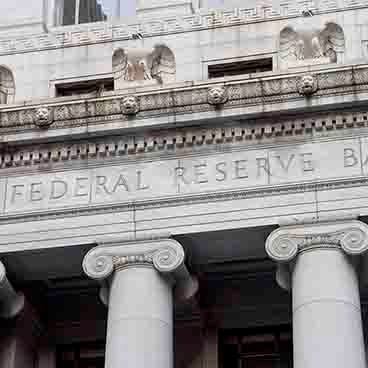 Waiting for the End…Just Not Yet

Though the Fed is close to the end of its rate-hiking cycle, additional increases in the fed funds rate are still likely, albeit less aggressive in magnitude.

U.S. equities came well off the lows of the day to finish higher, as investors shook off the Fed's decision to raise rates for a seventh time.

Markets And Economy Market Volatility Us

All expressions of opinion are subject to change without notice in reaction to shifting market or economic conditions. Data contained herein from third party providers is obtained from what are considered reliable sources. However, its accuracy, completeness or reliability cannot be guaranteed.  Supporting documentation for any claims or statistical information is available upon request.