September 26, 2022 Jeffrey Kleintop
The persistence of global inflation could determine which of the three paths central banks may follow and which market qualities investors might consider for their portfolios. 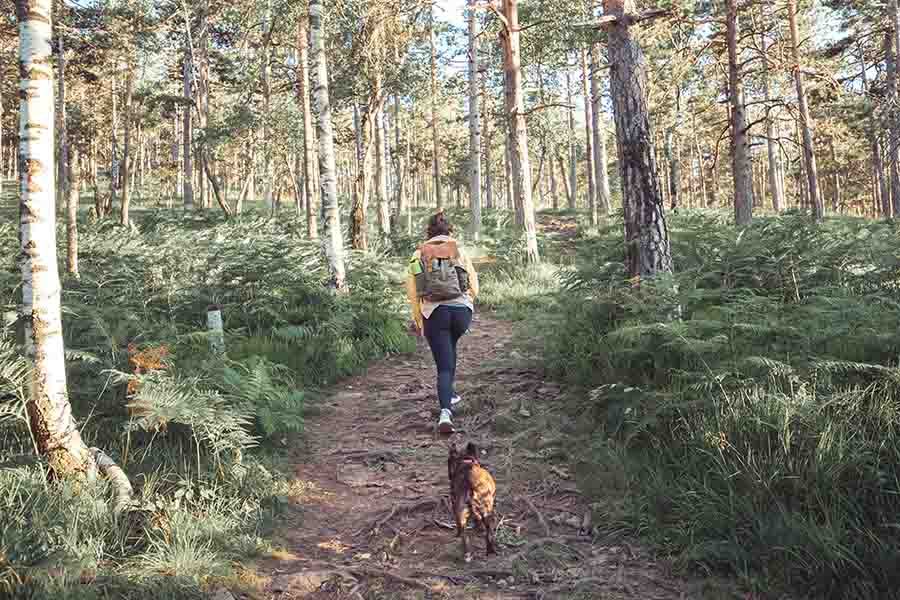 Last week, investors digested the news that the Bank of England, U.S. Federal Reserve, and Sweden's central banks raised policy interest rates by 50, 75 and 100 basis points (bps) respectively, following 75 bps hikes from the Bank of Canada and European Central Bank the week before. These were monumental moves but held few surprises. Given the sheer volume of hikes, it might have been easy to miss some signs that last week's central bank hawkishness could be nearing a peak—at least for now.

There are still market and economic impacts that may come in Europe from the war in Ukraine, in China from COVID lockdowns, and developments elsewhere. However, the global outlook is primarily driven by the impact of central bank actions adding to the economic weakness that has developed in the third quarter of 2022. The deteriorating growth outlook can be seen in the Global Composite Purchasing Managers' Index, which tracks the sentiment of business leaders of 27,000 companies in over 40 countries accounting for 89% of global GDP. The index dropped below 50—the dividing line between growth and contraction—in August and it is likely to print another negative reading in September, based on preliminary data released on Friday from S&P Global.

Levels of economic growth indicated by the Global Composite Purchasing Managers’ Index. September reading is a forecast based on preliminary data.

For investors, the singular path of rate hikes and slowing growth that weighed on stocks for much of 2022 may soon begin to give way to a few different paths: good, bad, and ugly.

Should inflation begin to recede significantly around year-end due to a softer labor market and easing housing inflation that is driving the Consumer Price Index (CPI) in many countries, markets may rebound on prospects for an end to the aggressive rate hikes of 2022. Yet, the economic outlook may be far from the "V"-shape seen in 2020. Rather we would expect a much flatter and sluggish recovery in 2023 as demand remains muted and excess inventories take time to clear while policymakers avoid reversing their rate hikes and remain vigilant for any sign of a revival in inflation.

What signs support this scenario? The central banks that were among the earliest to hike a year ago are now signaling they may be done. The central bank of Brazil, one of the largest emerging-market countries, signaled rate hikes ended in August and confirmed it with no move last week at their September meeting. Last week, Norway's central bank signaled it may be close to its final rate hike after a 50bps hike last week. Norway was the first among G10 central banks to hike policy rates one year ago and is now signaling it may be the first to halt. We may be nearing a peak in the number of the world's 115 central banks that are hiking rates.

Number of central banks hiking near a peak? 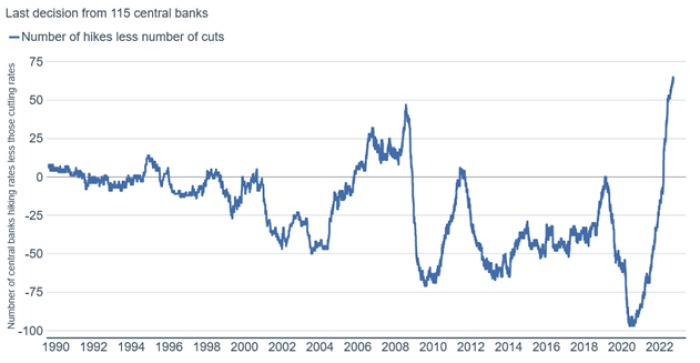 Even if excess inflation begins to ease significantly, there is a chance it may soon return. Although some central banks are ending their series of rate hikes, the global policy rate for developed market countries around the world excluding the U.S. is still very low on a historical basis at only 1.5%. It was 3% before the Great Financial Crisis of 2008-09, around 5% for much of the 1990s and 10% in the 1980s. 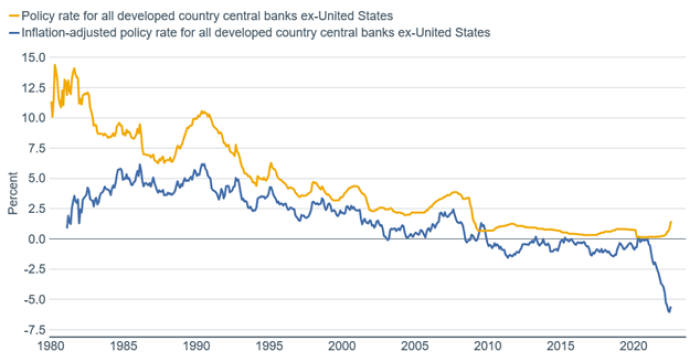 More significantly, policy rates are deeply negative when adjusted for inflation, which is how central bankers measure their effect. Real rates (the policy rate minus the rate of inflation) are not considered restrictive until they are above zero. Despite the recent rate hikes, the global real policy rate is still deeply negative—and therefore considered accommodative to growth and inflation. It has only recently started to turn around from its all-time lows and has a long way to go to get back above zero.

If central banks respond to a weakening labor market and stop hiking too soon or cut rates while the real policy rate is still firmly negative, there's a chance inflation may rebound. If it does, even higher rates may be needed to quell inflation. This scenario played out in the 1970s and early 1980s among major developed markets' central banks in Europe and the United States: rate hikes followed by rate cuts followed by more hikes to even higher rates.

Stocks may rebound as more central banks signal an end to hikes in the coming months, but that may reverse if it becomes apparent inflation is reviving and policy rates would need to be hiked again. This whipsawing pattern may support a continued environment of volatility and wide market swings as seen this year.

Alternatively, we could take central bank leaders at their word. The Federal Reserve's Powell, European Central Bank's Lagarde, and Bank of England's Bailey, and others invoke the memory of Paul Volcker, the head of the Fed from 1979-1987, and pledge to hike rates until the global real rate is restrictive enough to ensure inflation is dead. If they persevere, the economy and stocks may face another year like 2022. Stocks would have further to fall with both price-to-earnings (PE) ratios and earnings contributing to declines; any prospect of a deep recession would likely force analysts to cut earnings estimates. In 2022, only the PE ratio drove declines while analysts' earnings forecasts continued to point to gains.

During Volcker's time, such an aggressive stance on inflation came only after a decade of painfully high inflation in the United States. With this same policy, today's central bankers have only faced one year's worth of high inflation and may be likely accused of adopting a single mandate, facing intense political and popular backlash should recession pressures deepen and job losses mount.

Which of these good, bad, or ugly paths is taken may be determined by how stubborn inflation turns out to be. We will continue to watch inflation developments closely, with particular attention to housing—a primary driver in most countries. For investors, we continue to highlight characteristics of stocks that are outperforming in this recessionary bear market environment. All this year we have focused on "quality" stocks, which we have defined in different ways. 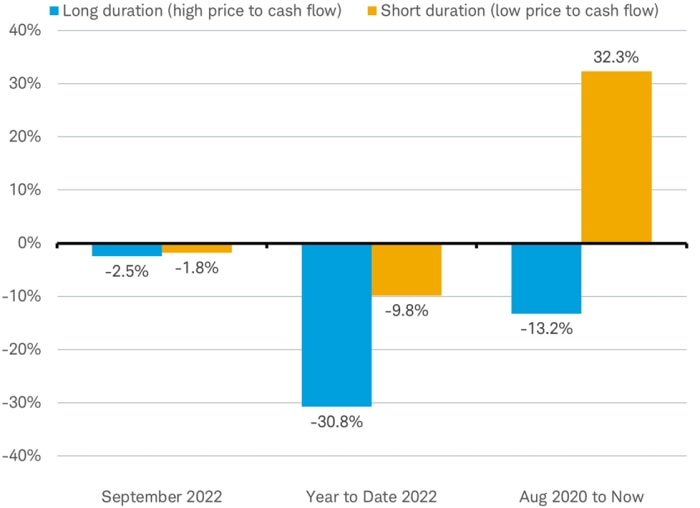 Performance presented for stocks in the MSCI World Index. Past performance is no guarantee of future results. 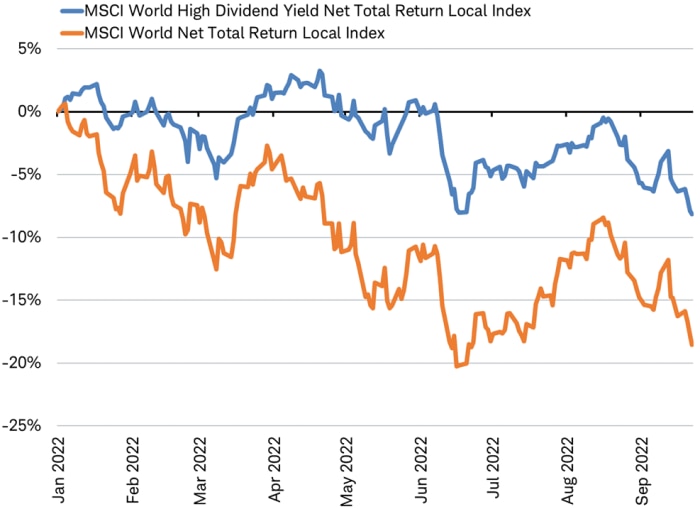 Indexes reported in local currency to avoid attributing currency differences to a dividend strategy. Past performance is no guarantee of future results.

All expressions of opinion are subject to change without notice in reaction to shifting market conditions. Data contained herein from third-party providers is obtained from what are considered reliable sources. However, its accuracy, completeness or reliability cannot be guaranteed. Supporting documentation is available upon request.

The policy analysis provided by the Charles Schwab & Co., Inc., does not constitute and should not be interpreted as an endorsement of any political party

Source: Bloomberg Index Services Limited. BLOOMBERG® is a trademark and service mark of Bloomberg Finance L.P. and its affiliates (collectively “Bloomberg”). Bloomberg or Bloomberg’s licensors own all proprietary rights in the Bloomberg Indices. Neither Bloomberg nor Bloomberg’s licensors approves or endorses this material, or guarantees the accuracy or completeness of any information herein, or makes any warranty, express or implied, as to the results to be obtained therefrom and, to the maximum extent allowed by law, neither shall have any liability or responsibility for injury or damages arising in connection therewith.