March 21, 2022 Liz Ann SondersKevin Gordon
Even if a recession is not imminent, the playbook deserves a dusting off as rising inflation, tighter monetary policy, and the war in Ukraine all crimp economic growth prospects. The last time I wrote about the risk of recession was in August 2019, although what ultimately tipped the economy into one six months later—the pandemic—was impossible to anticipate at that time. Given the Federal Reserve's shift to tighter monetary policy, the impact of rampant inflation on growth, and now the deleterious impact of Russia's invasion of Ukraine, dusting off the recession playbook is in order.

What say you, leading indicators?

The Conference Board's Leading Economic Index (LEI) is among the most reliable gauges of turning points in business cycles. Given the nature of its 10 subcomponents (more on that later), the broad index's moves generally signal when economic activity has reached a peak, trough, or slowdown.

Given the nature of this report, it is perhaps apt to remind investors of our oft-expressed view that, when it comes to the relationship between economic data and the stock market, better or worse tends to matter more than good or bad. In other words, the rate of change in the data is often where we can look for inflection points—that is, what provides the "tell" as to whether we're entering a new phase of the cycle.

As such, if we look at the LEI in year-over-year-change terms, shown in the chart below, you can see that the latest reading of 7.6% in February is strong relative to history, though off the boil of 12.3% in April 2021. Base effects have helped up until this point—given the change in February 2021 was -0.9%— but comparisons will inevitably become more difficult moving forward. The economy is now also facing several headwinds from Russia's invasion of Ukraine and weakening trends among subcomponents.

The current change has yet to reach the average -1.4% reading in the month prior to past recessions. That is by no means a definitive threshold to guarantee the end of the cycle, given the wide historical range, but it tells us (for now) that there may still be a good portion of runway left.

As mentioned, trends are often more important than levels as possible inflection points. Thus, peeling back the LEI onion one layer exposes flags (a couple of red, otherwise mostly yellow) that are worth noting. Shown in the first portion of the table below are the 10 subcomponents of the LEI. While levels are generally healthy or fair (with the exception of average consumer expectations for business conditions), trends look less impressive.

Key to watch will be the emergence of additional worsening trends. Historically, a consistent sea of red in the "trend" column has preceded weakness in the "level" column and, eventually, a deterioration in the Coincident Economic Index (CEI), which is shown in the bottom portion of the table.

Looking to the trend-setters 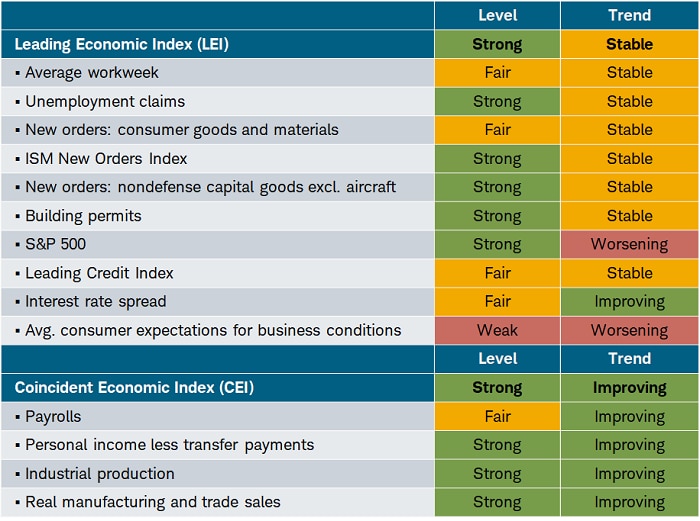 For illustrative purposes only.

What a recession is and isn't

The National Bureau of Economic Research (NBER)—the official arbiters of U.S. recessions—defines a recession as "a significant decline in economic activity that is spread across the economy and that lasts more than a few months." The definition of a recession is not two quarters in a row of negative gross domestic product (GDP) growth; although many believe that is the "traditional" definition (it isn't).

Not coincidentally, the four components of the CEI are what the NBER primarily monitors: "The determination of the months of peaks and troughs is based on a range of monthly measures of aggregate real economic activity … [including] real personal income less transfers, nonfarm payroll employment, employment as measured by the household survey, real personal consumption expenditures, wholesale-retail sales adjusted for price changes, and industrial production."

The NBER's assessment is always made retroactively, as the committee looks back to the peak in activity as end of the cycle and beginning of the recession. Thus, while both the trend and level of the CEI look strong right now, they don't tell us much about where we're headed. It's tempting to find comfort in the fact that data look strong/good, but the reality is that deterioration in trends often lurks in the background and can spread rather quickly. So far, so good, but investors should probably swap their "level" lenses for their "trend" lenses right now.

The Conference Board also conducts the monthly Consumer Confidence survey, which has a number of component parts. In addition to the "headline" reading of confidence broadly, there are sub-questions about consumers' present situation confidence vs. their confidence about the future (the expectations component). Shown below, the spread between the two—with expectations quite a bit worse than consumers' assessment of their present situation—has never been this low in history without a recession either pending in fairly short order, or already underway.

It's no wonder consumers are feeling glum, with hits having come from the pandemic and now exacerbated by inflation, tighter financial conditions and the Russia/Ukraine war. We believe the current environment is better described as counter-cyclical (or cost-push) inflation—when high prices put downward pressure on demand/growth—than 1970s-era stagflation. That said, it is worth keeping an eye on the Misery Index, which was born in that era and simply adds the inflation rate to the unemployment rate.

Misery Index up, but not high

As mentioned at the start of this report, the Fed's shift to start normalizing monetary policy—and the attendant tightening of financial conditions—is generally a good reason to dust off the recession playbook. Yield curve inversions have historically been a reliable precursor to recessions. The spread between 10-year and 3-month Treasury yields remains fairly steep; however, the spread between 10-year and 2-year yields, shown below, is only about 20 basis points from being inverted. Inversions in that spread often pre-date inversions in the 10-year, 3-month curve.

Yield curve inversions are often viewed as a cause of recessions, when in fact, they are better thought of as a symptom of the conditions that tend to lead into recessions. On the other hand, spikes in oil prices have historically been a cause of recessions. The chart below shows the real (inflation-adjusted) Bloomberg crude oil price percentage change from its 24-month moving average. As you can see (denoted by the yellow dotted line), only once (in August 2005) since the early 1970s did the change move above 50% without a recession on its way or already underway.

Y-axis is truncated for visuals purposes.

The S&P 500 has, so far, avoided a bear market using the traditional -20% from a peak (the same can't be said for either the NASDAQ or Russell 2000). Looking ahead, if a recession becomes increasingly likely (not a layup call), it would likely mean more equity market pain is in store.

Using Ned Davis Research's data for the Dow Jones Industrial Average, which has history back to 1900, shown below is the difference in the severity and length of bear markets depending on whether a recession occurred or not. You can see the percentage loss and length in market days for every bear market with or without a recession (the red and green dots, respectively); and the mean loss/length (red and green squares). In comparison to all bear markets (black square), bears without recessions were shorter (213 days) and less severe (-25.4%) relative to bears with recessions, which were longer (353 days) and more severe (-34.6%). Will Fed hike until "something breaks"?

Since the 1970s, there have been three primary reasons why tightening cycles have been followed by recessions:

Economic data has been generally weakening recently, which is likely to persist, increasing recession probabilities. A recession is not yet the base case, but it is time to put it back on our radar screens. In pre-recession periods, higher-quality, higher-free cash flow and lower-volatility factors tend to outperform (as has been the case since the Fed announced balance sheet tapering last November). The recent rally had a lower-quality, higher-volatility flavor to it. It's too soon to make a judgement that this market message is indicative of lower recession risk or just bottom-fishing among some of the harder-hit areas of the market during the correction.

A notable risk in this cycle is associated with the Fed's need to move further off the zero bound on rates and start shrinking its balance sheet amid elevated inflation pressures. The Fed's eye is now clearly on inflation, and no longer on supporting the economy as it emerged from the worst part of the pandemic. In fact, the Fed is actively pursuing tighter financial conditions and a slowing in aggregate economic demand. Last week's easing in financial conditions, alongside the stock market rally and weaker dollar, is unlikely to have legs longer-term.

This is a unique period in that the Fed has embarked on a rate hiking cycle with inflation this high, and growth expectations as low as they are presently (Atlanta Fed's GDPNow forecast is only 1.3% for first quarter real growth). It's always difficult for the Fed to land the economic "plane" softly; perhaps even more difficult in today's unique inflation environment and with the added kicker of the Russia/Ukraine war.

The U.S. economy exited the lockdown phase of the pandemic with an incredibly sharp acceleration, which persisted until late last year. The health of the labor (and housing) market offers some tailwinds against the headwinds of inflation and Fed policy, but bouts of equity market volatility (and weakness) are likely to persist.

The recent stock market rally has had a better breadth tone to it and sentiment remains dour (a contrarian indicator). However, given the unique uncertainties of the day, this is not an environment to take on excess risk. Instead, stick close to strategic asset allocations and benchmark sector allocations—using the disciplines of diversification and periodic rebalancing to navigate heightened volatility.

Diversification, asset allocation and rebalancing portfolio strategies cannot ensure a profit or protect against a loss in any given market environment. Rebalancing may cause investors to incur transaction costs and, when rebalancing a non-retirement account, taxable events may be created that may affect your tax liability.