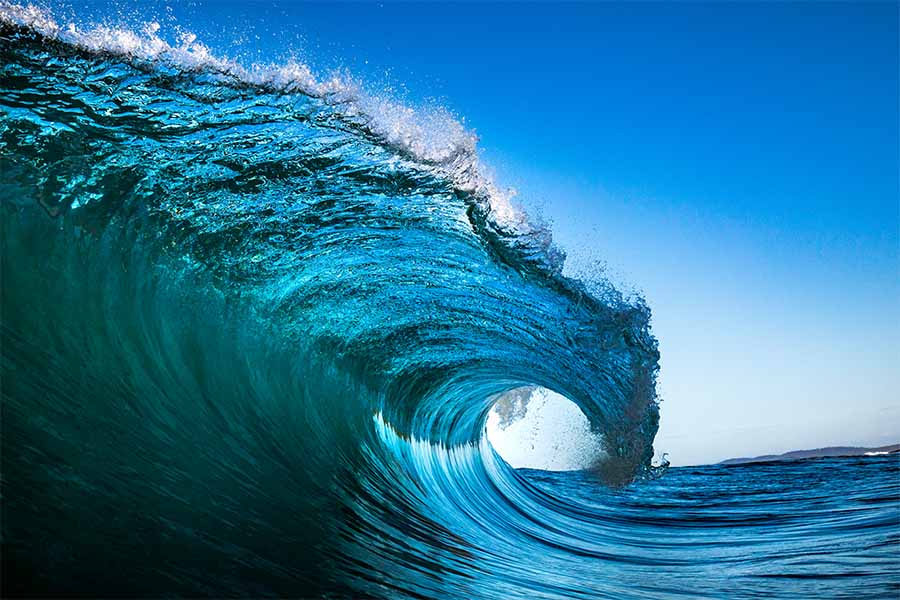 The ocean connects all the world's continents and its people. In fact, three-quarters of the world's cities are along the coastline and 80% of the world's population live within 60 miles of the coast, according to the United Nations. More than 90% of the trade between countries is carried by ships while about half of the communications between nations use undersea cables.

We are all connected by the ocean and it's part of how we perceive the world. This extends into how we see the financial world and markets. We often use words that are connected to the vast oceans of water, such as: 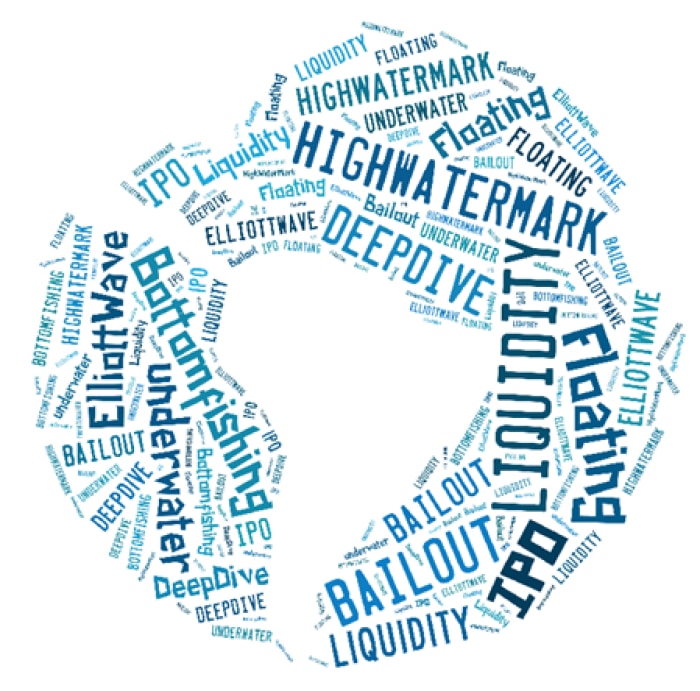 The oceans are filled with resources and opportunities, but they also hold risks—like sharks. A shark attack may be taking place right now on the portfolios of unwary investors. We have been using this shark chart for a long time to talk about cycles in investing and the danger posed when the trend changes and the jaws begin to bite down. Historically, each economic cycle the lines have changed direction; the leader becomes the laggard. The leaders of the last cycle tend to reverse and fall the most in the bear market while the recovery and next cycle tend to see new leaders. When the blue line is rising, international stocks are outperforming, as they did in the 1980s and 2000s, and when the orange line is rising U.S. stocks are outperforming as they did in the 1990s and 2010s. It reverses every cycle, but the degree of outperformance differs. The reasons are as behavioral as much as they are fundamental, after a full cycle of outperformance trends reverts. The only exception was in 2020. That recession was too short (at just two months) and saw too much stimulus from the U.S. Federal Reserve and the government as they pumped money into the economy and markets, further driving liquidity-driven U.S. tech stocks. But that stimulus reversed in 2022 for the first time in a decade, as did the relative performance, with international stocks leading the recovery.

Many investors are focusing on trying to determine if the bear market is over—but they could be missing the shift in leadership that may have already begun. A major shark attack is underway that could take a big bite out of unprepared investors' portfolios. Those who haven't rebalanced—trimming what had been outperforming and buying what had been lagging—could be especially at risk. These cycles tend to last years, not months, with the new leadership continuing until the next cycle. Therefore, even after a year of outperformance it isn't too late to rebalance from U.S. to international stocks to weights in line with a long-term strategic asset allocation.

Beyond the start of a new long-term economic cycle pointing to a likely shift to international leadership, there are near-term drivers that may help to sustain international outperformance in 2023. 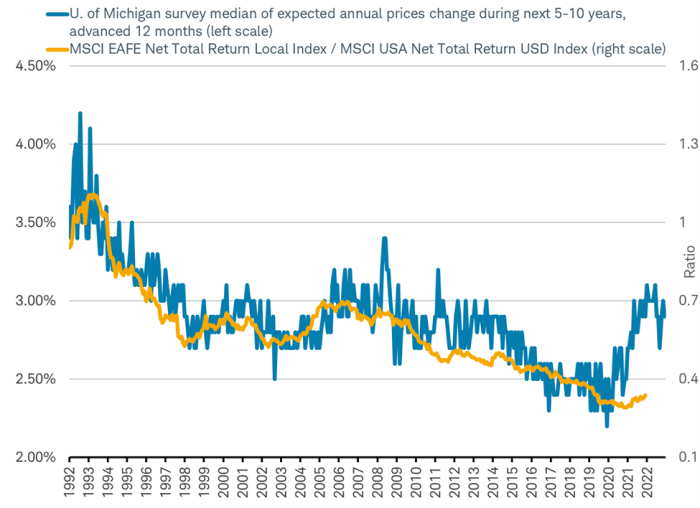 The cycles that have defined the relative performance of U.S. and international stocks for decades appear to be repeating and near-term drivers support this shift in leadership in 2023. But there can be no guarantees. We see two key risks to international outperformance in 2023:

The global economy and markets are like the world's oceans; constantly in motion, teeming with different organisms interacting with each other.

Waves and changing tides are fun to watch but they prompt only short-term moves in water, like the waves of volatility in the markets or the changes in news flow that can drive them. In contrast, almost invisible, currents move water slowly but travel vast distances over a long-term cycle. While many investors watch the news flow and daily market swings, we foresee that the long-term economic cycle is likely to result in enduring and sizeable shifts in the markets favoring international stocks.

After a decade of leadership by U.S. tech stocks, rather than concentrating in a particular sector or country, a broadly diversified portfolio with exposure to international stocks may reward investors who go with the flow in 2023.

The Reserve Bank of Australia (RBA) was next-up with its interest rate announcement and as expected, hiked the Official Cash Rate (OCR) by 25 basis points to 3.35% on Tuesday.

Please note that this content was created as of the specific date indicated and reflects the author's views as of that date. It will be kept solely for historical purposes, and the author's opinions may change, without notice, in reaction to shifting economic, business, and other conditions. Supporting documentation for any claims or statistical information is available upon request.

Performance may be affected by risks associated with non-diversification, including investments in specific countries or sectors. Additional risks may also include, but are not limited to, investments in foreign securities, especially emerging markets, real estate investment trusts (REITs), fixed income, small capitalization securities and commodities. Each individual investor should consider these risks carefully before investing in a particular security or strategy.

Indexes are unmanaged, do not incur fees or expenses and cannot be invested in directly. For more information on indexes please see schwab.com/indexdefinitions.

Diversification, asset allocation and rebalancing strategies do not ensure a profit and do not protect against losses in declining markets. Rebalancing may cause investors to incur transaction costs and, when rebalancing a non-retirement account, taxable events may be created that may affect your tax liability.