Liz Ann SondersKevin Gordon
Much attention has been paid to the elevated risk (and announcement) of a recession, but investors should instead focus on signals coming from leading economic indicators. 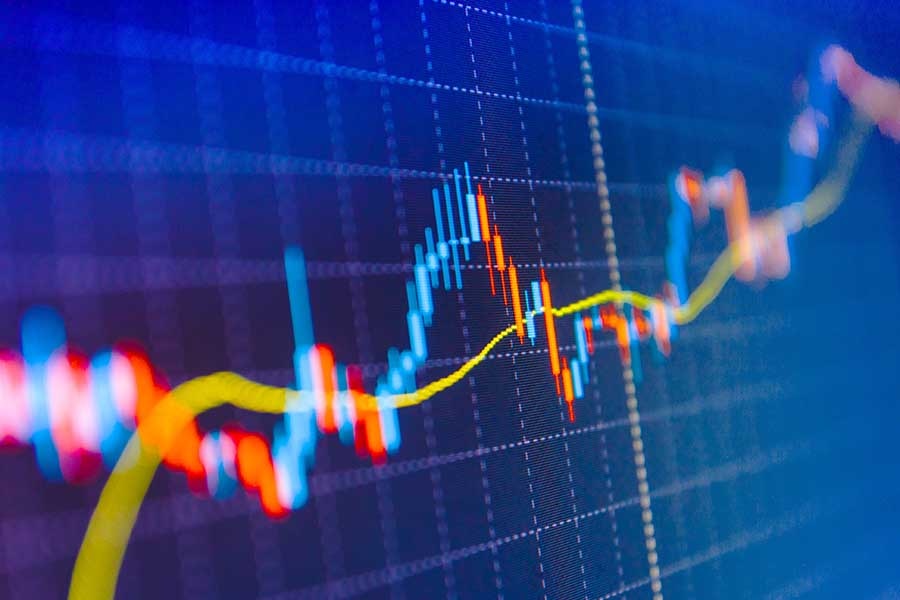 Before any analysis specific to the current economic and/or stock market cycle, it's important to look at the history of cycles. We recently put together the graphic below that shows every recession (orange bars) and equity bear market (blue bars) in the post-WWII era. The individual boxes represent monthly increments; and the date range to the left represents the entire cycle, from either the beginning of the bear market or the beginning of the recession, to the final completing of the cycle. 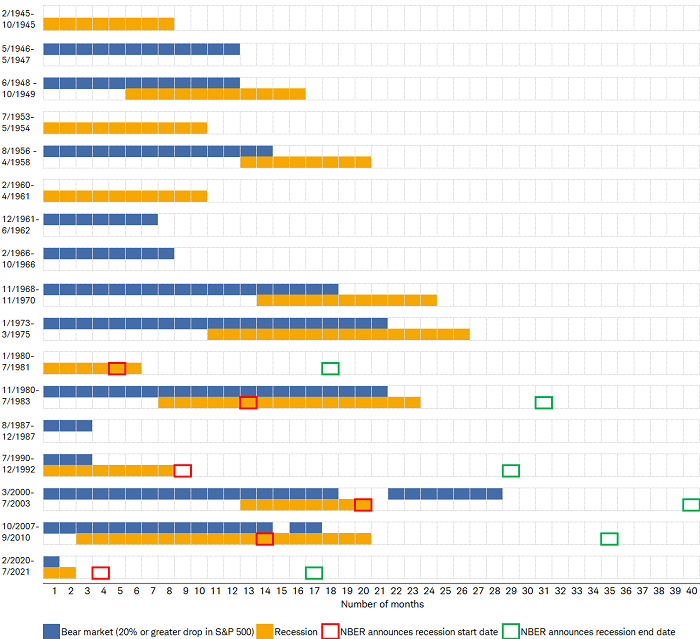 What recessions are and aren't

The visual above also highlights the lagged nature of the declaration of recessions' start and end dates. Since 1978, the official arbiter of recessions has been the National Bureau of Economic Research (NBER), which provides start/end dates by month; always in retrospect. In contrast to conventional wisdom, the NBER's definition is not two consecutive quarters of negative gross domestic product (GDP) readings.

The actual definition per the NBER is "a significant decline in economic activity that is spread across the economy and that lasts more than a few months." The NBER's Business Cycle Dating Committee's (BCDC) view is that "while each of the three criteria—depth, diffusion and duration—needs to be met individually to some degree, extreme conditions revealed by one criterion may partially offset weaker indications from another."

To determine the months of peaks and troughs, the NBER's BCDC specifically monitors "real personal income less transfers, nonfarm payroll employment, real personal consumption expenditures, wholesale-retail sales adjusted for price changes, employment as measured by the household survey, and industrial production." The NBER has "no fixed rule about what measures contribute information to the process of how they are weighted."

Hindsight analysis re: timing of recessions

With that as background, let's look at the current cycle in the context of history.

As we've mentioned many times throughout the year, the current cycle has myriad unique aspects that don't align with "traditional" cycles in the past, which is sending mixed signals. Pockets of the economy—such as housing—are exhibiting recessionary-like behavior. Conversely, despite some stress fractures beneath the surface, the labor market remains strong in terms of net jobs created. That has helped bolster consumer spending; the rub is that credit card debt levels have increased, and savings rates have plunged due to still-hot inflation.

When looking at leading economic indicators in an aggregate sense, the scale has tipped in an unfavorable direction. One of our favorite and most widely tracked economic metrics is the Leading Economic Index (LEI) from The Conference Board. It's an amalgamation of 10 indicators that have historically led broader economic activity. As shown in the chart below, the LEI has fallen by 1% over the past year. The yellow dashed line indicates the average percentage drop at which the index has been (-2.2%) when recessions have started.

The current drawdown is on the cusp of hitting the average recession level. However, given the relatively small sample size of recessions, it's worth considering the wide variability around the -2.2% average. The following list shows the index's annual change at the month of each recession's start, going back to 1960:

If anything, the range shows that there isn't a consistent percentage that indicates recessions have begun. There are times, like in March 2001, when the LEI had a more severe dive leading into that year's recession. Conversely, there was an instance, in April 1960, during which the LEI was still increasing when the recession started. In fact, it never contracted in year-over-year terms throughout the 1960-61 downturn.

Given the variability around prior annual declines, monthly activity and the index's breadth need to be considered; both of which look weak in the current cycle. As shown in the chart below, the LEI has contracted for six consecutive months. In the long-term history of the index, it has never experienced that long of a losing streak without already being in, or soon approaching, a recession. Again, though, there is some variability here. The streak of declines in 2006 proved to be a bit early, but that was in part driven by the deterioration in housing-related data, which correctly signaled the coming recession and thus stunted the LEI’s short-term bounce at the end of that year.

Under the surface, strength among the LEI's components has waned. We count only one—initial jobless claims—with a decent trend, though we downgraded it from "improving" to "stable" given that claims recently began moving higher again. The table below shows all of the subcomponents of both the LEI and Coincident Economic Index (CEI), along with their levels and trends. Especially at turning points in the economy, the LEI trend column (currently a sea of red) takes on more importance than the level column; another highlight of our oft-expressed view that "better or worse matters more than good or bad." 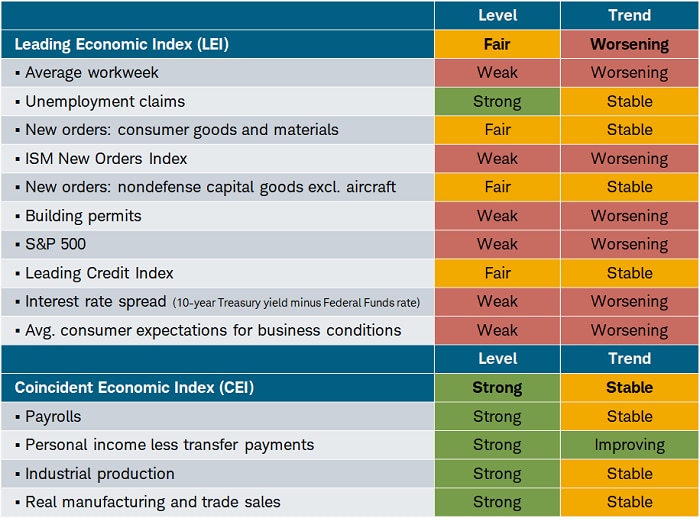 To have stronger conviction that a soft landing might be possible, we would have to see a material reversal in trends and breadth statistics. With weakness spreading, though, it's tough to envision that scenario, especially because we have yet to feel the full impact of the Federal Reserve's aggressive tightening cycle, among other forces (like the strong U.S. dollar and wealth effect through asset market drawdowns).

Speaking of the Fed's tightening cycle, the chart below—borrowed from our friends at Ned Davis Research (NDR)—shows the history of tightening cycles' impact on coincident economic indicators (a monthly proxy for quarterly GDP). It further breaks cycles into "slow" and "fast" based on the level of aggressiveness of the Fed. With the current cycle the fastest/most aggressive in history, it's no surprise that the current trajectory of the economy (green line) is significantly weaker than even fast cycles of the past (orange line); especially since the initial rate hike in March of this year. 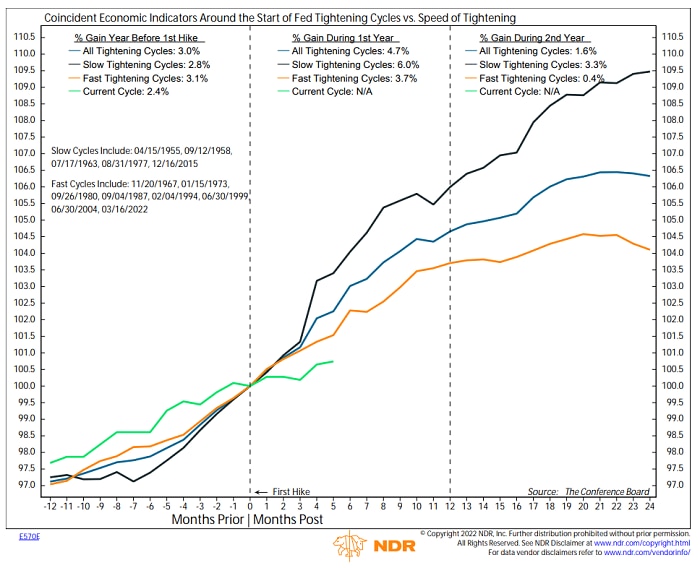 Data is indexed to 100 at 0 months and y-axis represents incremental percentage increases.

As goes the economy, so goes earnings

Alongside the recession-like weakness displayed in a number of leading indicators, the corporate earnings outlook is deteriorating as well. This is consistent with history. As shown below, every post-WWII recession was accompanied by a decline in S&P 500 GAAP earnings per share, to the tune of a mean of -25% and a median of -17%. Further distribution prohibited without prior permission. All Rights Reserved. See NDR Disclaimer at www.ndr.com/copyright.html. For data vendor disclaimers refer to www.ndr.com/vendorinfo/, as of 10/14/2022. EPS (earnings per share) based on 4-quarter total GAAP (generally accepted accounting principles.) EPS. EPS peak and trough are within one year of recession. Past performance is no guarantee of future results.

Third-quarter S&P 500 earnings season has begun and, so far, the results are decent, but they're being compared to consensus estimates that have been persistently lowered since early summer. The current consensus is that S&P 500 operating earnings will be up 3% year/year in the third quarter (an estimate that is a constantly moving target as more companies report earnings, but is down from more than 11% in July). That would be a notable deterioration relative to the more than 8% growth in the second quarter. Excluding the Energy sector, the third-quarter consensus is -3%, which would also be a deterioration from the second quarter's -2% ex-Energy.

We continue to suggest investors focus less on metrics like the "beat rate" and more on forward guidance. We are specifically looking for comments on pricing power, profit margins, and the impact of the strong U.S. dollar and higher interest rates. Looking ahead, we believe the path of least resistance for forward expected earnings growth remains down.

The NDR data below (with the concept courtesy of my first boss and mentor, the late, great Marty Zweig), covers the full history of the S&P 500. As shown, earnings have recently decelerated swiftly from the "rapid earnings growth" zone to what might be considered the neutral zone. The performance numbers in the accompanying table are an important highlight of the power of trend reversals and the leading indicator nature of equities. Past performance is no indication of future results.

Yes, the worst performance for the stock market has historically come when earnings were imploding to the tune of at least -25%. However, the reversal into still-weak-but-improving territory has tended to bring with it the best historical performance. Once earnings growth has moved into its highest (at least 20%) zone, stocks historically "sniffed out" the likely peak, barely registering positive performance. It's another example of better or worse often mattering more than good or bad.

Given multiple recessionary red flags, escaping an NBER-defined recession would certainly rewrite history from the perspective of the LEI, but perhaps more important today is to recognize that several segments of the economy are experiencing their own recessions, including housing and segments of the goods side of the economy—with services a positive offset for now. Asset owners are feeling sharp pain from the "everything" bear market, while most consumers' spending power has dwindled under persistently hot inflation. An announcement of a recession might be more of an academic exercise at this point.