November 11, 2022 Liz Ann SondersJeffrey KleintopKathy Jones
As the Federal Reserve continues to ratchet up the pressure with higher interest rates, cracks are beginning to appear beneath the surface of the U.S. economy. 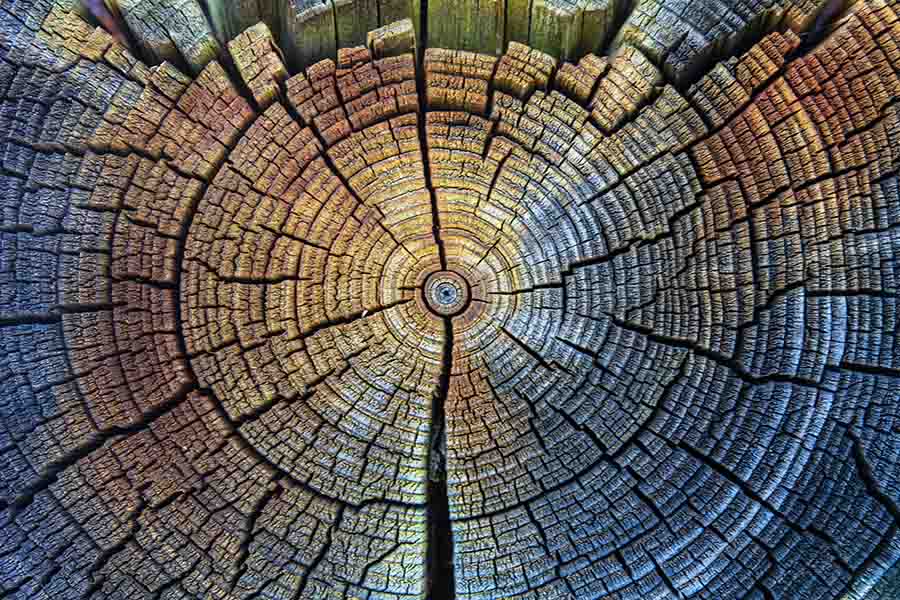 While that's not great for workers, it would represent a victory for the Federal Reserve's battle against inflation. The most interest-rate-sensitive areas of the economy, such as housing, have already slowed. A rising dollar could also help lower inflation, as a strong currency tends to make imports cheaper and slow exports.

Meanwhile, notwithstanding decent headline economic growth numbers for the third quarter, leading indicators suggest a global recession may have started during the period. It appears to be mild so far.

On the surface, the labor market continues to look relatively strong—the economy added 261,000 jobs in October, and September's number was revised upward to 315,000. At 3.7%, the unemployment rate remains quite low, while wage growth is slowing, suggesting the Fed's efforts to tamp down the job market and reduce inflationary wage pressures are working.

However, the positives may obscure significant weakness. The household survey—from which the unemployment rate is calculated—indicates much more anemic job growth over the past seven months than the payroll survey (which tends to get more attention). The former showed net gain of just 150,000 jobs during the period, while the latter showed a jump of nearly 2.5 million. The household survey has historically revealed turning points in the job market before the payroll survey, suggesting the rate of job creation could slow soon. 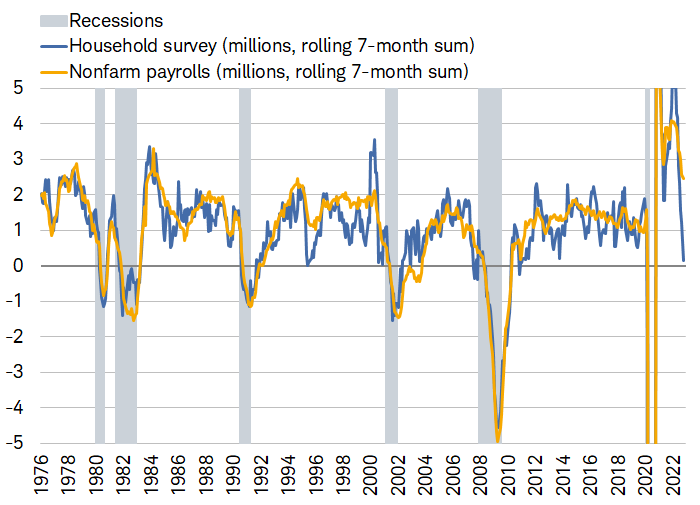 Y-axis truncated at 5 million and -5 million. The rolling seven-month sum is the total number of jobs for the preceding seven-month period; rolling returns can be useful because they smooth past performance to account for multiple time periods, not just a single instance.

Workers are also working fewer hours. Despite compressed profit margins and weak productivity, companies have been opting for hours cuts over layoffs. That has resulted in a notable slowdown in average weekly wage growth, but the still-high nominal level of wage growth could be a red flag to the Fed insofar as it adds to inflation expectations. More aggressive action by the Fed could further erode wages in turn. As for what level of wage growth the Fed might prefer, we address that in the fixed income section below.

The market has found itself in the counterintuitive position of cheering any evidence that the economy may be weakening this year. The hope is that slowing growth could tempt the Fed to ease up on rates. Investor sentiment—as reflected by SentimenTrader's Smart Money Confidence and Dumb Money Confidence indexes in the chart below—has closely tracked hopes for a less aggressive Fed. Yet Dumb Money Confidence has been caught wrongfooted several times, consistent with reversals in the equity market—be it from Fed pushback and/or hotter inflation readings.

Confidence stuck in a rut 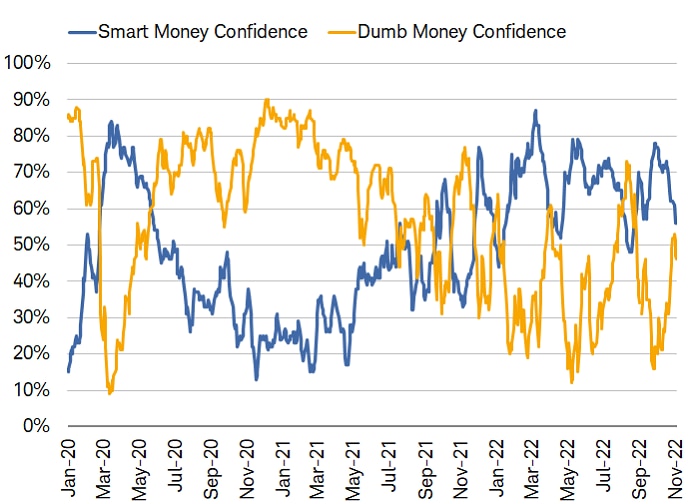 The Fed wants to see durable evidence that the economy has settled into a more manageable groove, but the unfortunate reality is that several indicators—especially within the labor market—suggest we may heading into more volatile territory. Given the rapid pace with which rates have increased and leading economic indicators (such as housing data) have deteriorated, there will be a point at which investors shouldn't hope for weaker economic data.

What we're looking for is a trough in leading indicators and hard evidence that the labor market has weakened.

Investors may be wondering how high interest rates will go and how long they will stay elevated. At its latest meeting, the Federal Open Market Committee (FOMC) delivered another 75-basis-point rate hike, bringing the upper band of the federal funds rate to 4%, its highest level since 2008. In the post-meeting press conference, Fed Chair Jerome Powell indicated that he would favor smaller incremental rate hikes going forward, but that there is still "a ways to go" before we reach the peak rate. He also suggested rates could stay high until the Fed is certain inflation is moving lower.

In response to these comments, the futures markets are now pricing in a rise in the federal funds rate to the 5%-to-5.25% region in the second quarter of 2023, with the rate staying above 5% until late 2023.

Market estimate of the federal funds rate using Fed Funds Futures Implied Rate (FFM2 COMB Comdty). As of 11/1/2022 and 11/7/2022, respectively. For illustrative purposes only. Please read the Risk Disclosure for Futures and Options prior to trading futures products. Futures accounts are not protected by SIPC.

Short-term rates moved up to new highs to reflect Powell's guidance. Long-term rates did not, with Treasury yields for maturities longer than five years below recent highs, resulting in a steeply inverted yield curve. The 2-year/10-year Treasury yield spread fell to its lowest level since 1981 before settling in at about -44 basis points. Historically, an inverted yield curve has been a reliable indicator of recession within about a year, which would imply that the Fed would be cutting rates before the end of 2023.

The yield curve flattened to its lowest level since 1981

Inflation trends will determine the direction of rates, and we see the potential for inflation pressures to ebb in 2023. Because of how long it takes changes in monetary policy to work their way through the economy, the Fed's rapid tightening moves this year are likely just beginning to have an impact and should mean lower inflation on the horizon.

The most interest-rate-sensitive areas of the economy, such as housing, have felt the impact, with sales slowing and prices edging lower. Lower house prices tend to reduce spending on durable goods such as appliances and furniture and will likely mean lower rental costs, a key factor in the inflation outlook.

In addition, the dollar's 13% appreciation over the past year will likely help lower inflation. A strong dollar tends to reduce the cost of imports because each dollar buys more goods and services from abroad. At the same time, it tends to slow export growth as U.S. goods become less competitive. The strong dollar has also forced foreign central banks to tighten policy rapidly to support their currencies even in the face of slowing growth. The result has been a rapid global tightening cycle which potentially should help bring down inflation.

The U.S. dollar has strengthened over the past year

Perhaps most importantly for the Fed, the trend in wage growth is beginning to slow after rising sharply over the past few years. Several Fed officials have expressed concerns about a potential "wage-price spiral" due to a tight labor market. However, the imbalance between the supply and demand for workers that emerged from the pandemic is beginning to ease. Over the past few months, average hourly earnings have fallen to a 4.7% year/year rate from over 5% for most of 2022. The annualized three-month rate of change has fallen to 4.1% in the goods-producing sector and 3.9% in the service sector. A reversion to a 3% growth rate would likely alleviate concerns at the Fed about inflation.

Third-quarter economic growth was better than expected for many major countries in North America, Europe and Asia, despite the effects of the war in Ukraine and China's rolling COVID lockdowns.

Despite all this promising news, a global recession likely began sometime during the third quarter. A drop below 99 in an index produced by the Organization for Economic Co-operation and Development (OECD) tends to happen right around the start of a global recession, as shown in the chart below. Today, the indicator is below 99 and may be signaling another recessionary period. 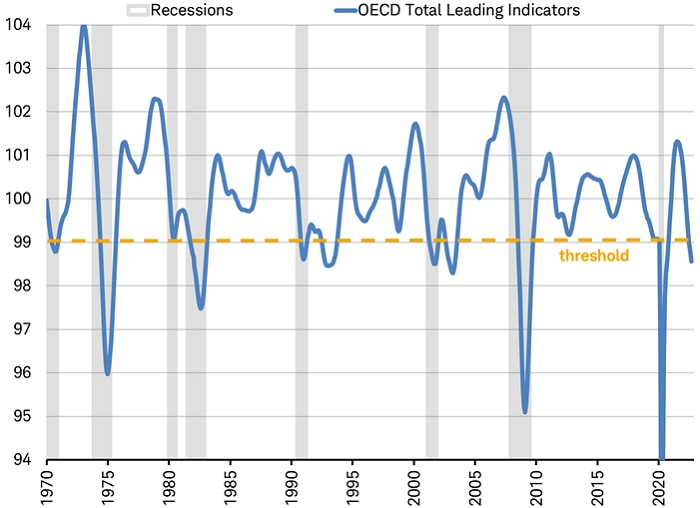 Source: Charles Schwab, Organization for Economic Cooperation and Development, Bloomberg data as of 11/3/2022.

Another important and widely watched indicator of recession is also signaling a possible recession: the global purchasing managers' index (PMI), which slipped below 50—the threshold between expansion and contraction—during the third quarter. The global composite PMI is compiled from surveys of business leaders for around 27,000 companies in over 40 countries accounting for 89% of global GDP. 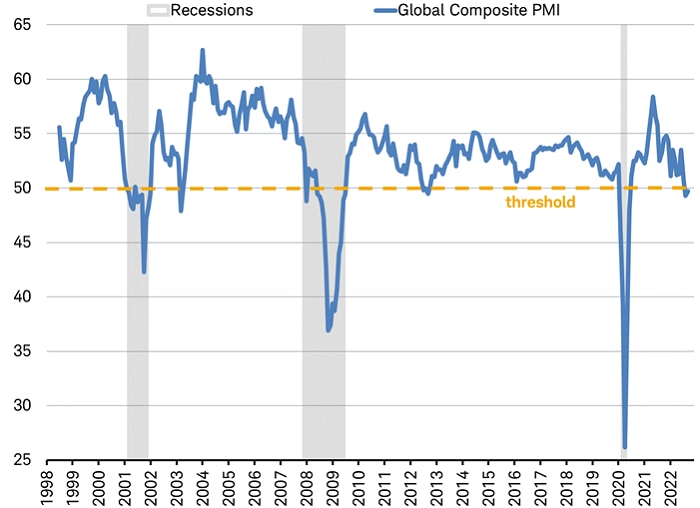 Chart shows history of 13-member OPEC production. A larger group called OPEC+ was formed in late 2016 to have more control on the global crude oil market.

This potential recession appears to be mild so far. Parts of the global economy and the economies of some countries are growing, partially offsetting others that are contracting. For example, while services (such as travel and leisure) remain strong, the demand for and manufacture of goods has been weakening (evidenced by rising inventories and slowing product sales). The likely recession is rolling through different parts of the global economy at different times, in contrast to the everything-everywhere-all-at-once recessions of 2020 and 2008-09.

Diversification and rebalancing strategies do not ensure a profit and do not protect against losses in declining markets. Rebalancing may cause investors to incur transaction costs and, when rebalancing a non-retirement account, taxable events may be created that may affect your tax liability.

Currency trading is speculative, volatile and not suitable for all investors.

Indexes are unmanaged, do not incur management fees, costs and expenses and cannot be invested in directly. For more information on indexes please see schwab.com/indexdefinitions