August 19, 2022 Liz Ann Sonders
Over the past 70 years, rising government debt generally has been accompanied by weaker economic activity. But it's not a simple relationship. 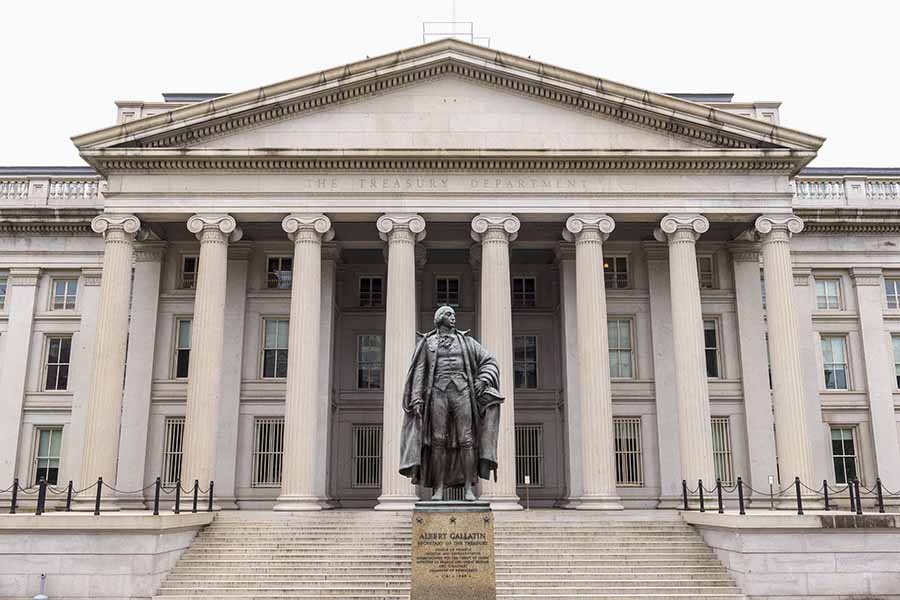 There is always a lot of controversy around the implications of high government debt. Over the past 70 years, high (and rising) government debt has generally been accompanied by weaker economic activity. The cause and effect can be debated, and there is also a bit of a chicken-and-egg, or "circular" argument: High and rising debt is a burden on growth, but low levels of growth also trigger an increase in government spending, higher budget deficits and higher debt.

In other words, one argument holds that a high and rising burden of debt crimps economic growth due to the "crowding-out" effect (that is, servicing the debt crowds out more productive spending and/or investments). A competing argument is that economic growth generally has been slowing over the past several decades—driven by demographics, globalization/competition, technology/innovation, and low inflation—which has led to increased government spending to try to boost growth, thereby increasing the deficit and, in turn, debt levels. The chart below represents the broadest measure of government debt, including federal government debt, state and local debt, and government-sponsored enterprise (GSE) debt (e.g., Fannie Mae and Freddie Mac). Courtesy of the strength of the economic rebound coming out of the lockdown phase of the pandemic—at the federal, state and local levels—government debt as a percentage of gross domestic product (GDP) has moved lower, which is good news (at least in relative terms).

Further distribution prohibited without prior permission. All Rights Reserved. See NDR Disclaimer at www.ndr.com/copyright.html. For data vendor disclaimers refer to www.ndr.com/vendorinfo/, as of 3/31/2022.

Further distribution prohibited without prior permission. All Rights Reserved. See NDR Disclaimer at www.ndr.com/copyright.html. For data vendor disclaimers refer to www.ndr.com/vendorinfo/, as of 3/31/2022.

Although it's not supported by any historical data, there is an elevated concern expressed about high debt and whether it, in and of itself, leads to serious and persistent inflation. The visual below looks at every decade since the 1970s—each color-coded. It shows the relationship between debt as a percentage of gross domestic product (GDP) and the inflation rate, as measured by the core personal consumption expenditures (PCE) measure (which is the Federal Reserve's preferred metric). As shown, as debt growth expanded as a share of GDP, inflation moved lower, not higher. There is a more recent debate about how much of the past year's inflation surge is due largely to COVID-19-specific supply/demand dislocations vs. the blow-out of the budget deficit as fiscal stimulus ramped up to ease the strains of the COVID recession. The answer is probably both.

Looking back, the United States' "net national savings" rate was relatively high coming out of World War II, but the United States had to finance itself internally after the war, given that Europe and Japan were all in dire financial straits. The difference today is that those and other countries have been more than willing to buy U.S. debt. In addition, the cost of servicing debt is currently historically low, so the Federal Reserve's role in "financing U.S. debt" is occurring at a very low cost (even if there are unintended negative consequences). In fact, as shown below, net interest payments are expected to remain low, before accelerating again.

Even under any future dire assumptions of the growth rate of net interest payments, we believe there is little risk of a U.S. debt default. In the meantime, there is generally an agreed-upon set of ways government can reduce its debt burden. One way, which the United States has been employing since the pandemic erupted is typically referred to as "financial repression"—involving keeping interest rates extremely low, which keeps real yields in negative territory. This force is not yet in the rear-view mirror, but the Federal Reserve has, of course, aggressively raised interest rates this year.

Another way is for the government to reduce spending and/or increase taxes. Thanks to the removal of much of the pandemic-related direct fiscal stimulus, and the beneficial impact on tax receipts courtesy of the strong economic recovery coming out of the lockdowns, both are working in favor of bringing down the rate of debt growth. Finally, the government can also try to boost growth and inflation, such that the denominator (GDP) is growing faster than the numerator (debt). That was exactly what happened in the late 1940s, just after WWII. Today, however, inflation is growing much faster than the economy, as well as faster than wage and income growth.

What we do know now is that as the debt ratio was soaring, each additional dollar of debt lead to significantly less than a dollar's worth of economic growth. This is referred to as the "credit multiplier" or "money multiplier." More debt is unlikely to generate greater economic growth, other than perhaps for a short span of time. As noted earlier, the weight of debt also represents a weight on economic growth. For all the cheering of the June 2009 to February 2020 expansion being the longest on record, it was also the weakest on record, as shown below.

Source: Charles Schwab, Bloomberg, Bureau of Economic Analysis, as of 6/30/2022.

A key to durable economic growth likely will require a continued move down in government debt ratios, which could trigger an expansion in the aforementioned credit multiplier.

U.S. stocks are falling to start off the new week, even as China took further measures to ease COVID restrictions.

Looking to the Futures: Another Upside Surprise for U.S. Payrolls

All expressions of opinion are subject to change without notice in reaction to shifting market, economic or political conditions. Data contained herein from third party providers is obtained from what are considered reliable sources. However, its accuracy, completeness or reliability cannot be guaranteed. This content was created as of the specific date indicated and reflects the author's views as of that date. Supporting documentation for any claims or statistical information is available upon request.