February 8, 2023
Liz Ann Sonders shares her perspective on the U.S. stock market and economy in this monthly Market Snapshot video. 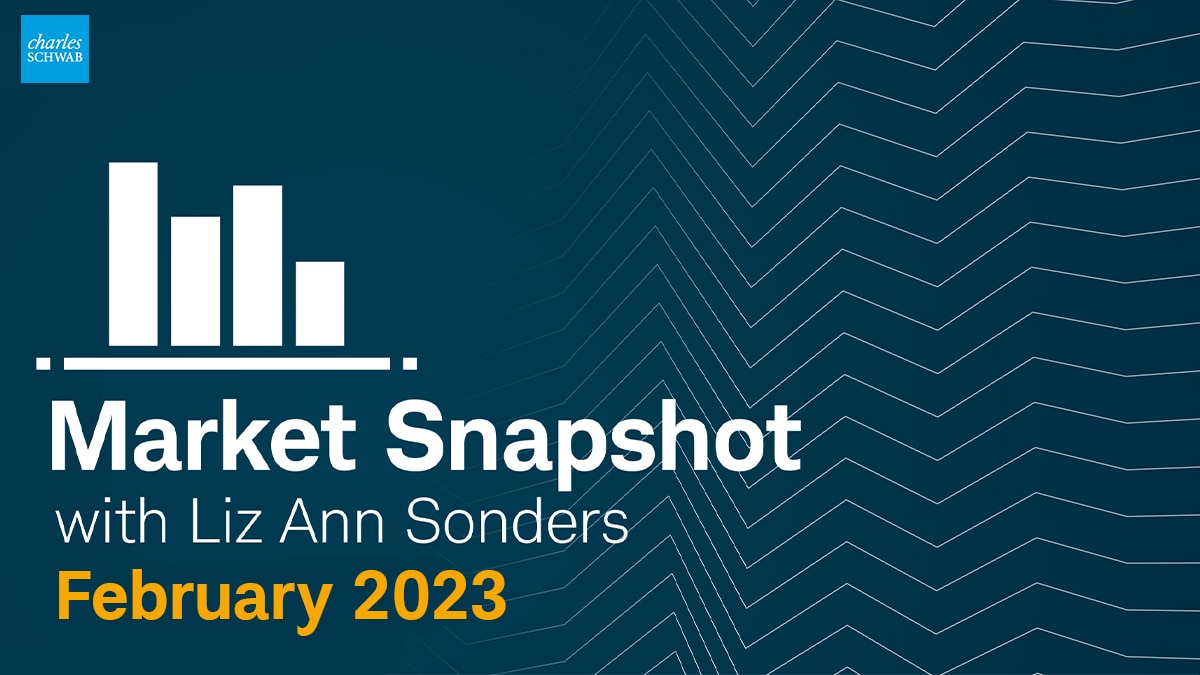 Well, it's that time of year, we're well into earning season, which in this case is for the fourth quarter of 2022. And it's been a while since I did kind of a full look at overall earnings picture, not just in terms of what's been reported so far for the fourth quarter, but what the outlook is for 2023.

So this is a very busy table. I know it's a very busy table. I'm not going to go into all of the details. It just lists all 11 sectors that are represented by the S&P 500®. And you see each row there is an individual sector. Each column is a quarter. You've got everything from the first quarter of last year through expectations that go out to the end of 2023. And then you can also see the calendar years of 2022 and 2023 on the right-hand side. You can see where there's been strength and weakness. These are all year-over-year earnings growth rates.

Let me just highlight here the fourth quarter of 2022; that's the season we're in the midst of right now. We're about two-thirds of the way through reporting season. So what these estimates represent is the combination of reports that have already come in, those actual readings blended with the consensus for companies that have yet to report. So we're, again, about two-thirds of the way of these being actual numbers. And if you look down at the very bottom, those rows represent the overall S&P 500, the index, including the energy sector, and then you can see ex energy. And the only reason for excluding that is that's where the real juice of earnings growth has been over the past year. So I think in that context, it's important to look at both with energy and without energy. And you can see that expectations are for a year-over-year decline of about 3%. That is the first negative quarter since the COVID recession period of time.

Ex energy, it's even worse, at just about minus 7½%. But also interesting, is if you do look at ex energy, because what a power driver that sector has been to overall earnings, you see that we're on track for what will probably be four quarters, at least four quarters in a row of negative earnings, year-over-year decline in earnings for the S&P 500 overall, excluding the energy sector. So take a look at this at your leisure if you are more into the weeds of individual sectors, as well as both past growth rates, as well as forward-looking growth rates.

But there's some better ways and I think more glaring ways to look at what the trajectory of earnings has been.

Now, one of the things that has tracked on a quarterly basis when we're in the midst of earning season is the so-called beat rate. That's the percentage of companies that have beaten analyst expectations. Now, one caveat here is those expectations have been coming down quite steadily since about last summer, and I'll get into that in a little bit more detail. So we do still have a positive beat rate. It's down to about 68, 69%, but as you can see, that is well down from where the beat rate was hovering when we were first coming out of the worst part of the pandemic, the lockdown phases.

So we have seen a pretty significant deterioration in the beat rate as the cycle has come to further maturity.

Yes, it's still two-thirds … more than two-thirds of companies are beating that lowered bar, but the amount by which they're beating has been steadily declining. And that reflects this maturation in the overall economic cycle, as well, obviously, as the earning cycle.

That has since not only come down, but crossed below the zero point to where we're now… analysts are now expecting about a 2½% decline in earnings on a year-over-year basis. The same thing has happened for the second quarter. Second quarter, you had expectations as high as 12% for 2023. That was about a year ago, back in May of 2022. That has since come down and has also moved to below the zero line.

So for both quarters at the beginning of this year, the first two quarters of 2023, the expectation is for a decline in earnings.

Now, you're also seeing a deceleration and expectations for the second half of the year, but so far, third quarter expectation remains in positive territory by about 3% or so.

But there, that's down from near double-digits just last fall. Same thing for the fourth quarter. Here, we've seen actually a little bit of a lift, and here's where the math comes into play. The more deterioration you see in the first part of the year sets up the potential for a bigger rebound. My contention, though, is that all of these lines have the risk of continuing to decelerate from here. I'm not sure the so-called rerating of earnings expectations has quite gone down enough, given all the myriad leading indicators that suggest earnings weakness to come.

For calendar year 2022 relative to calendar year 2023, here is the trajectory of earnings. In this case, we show it in dollar terms, so you can get a sense of the full picture of calendar year earnings. So this is the dollars per share for overall S&P 500, all 500 companies. And you can see at the peak, this was in June of last year, it was expected that S&P earnings would be about 230.

My view is, again, for all the reasons tied to the broader economy, the leading indicators, what has happened in the bond market to yields, the acceleration until recently in the dollar, inflation rates, profit margin estimates, I expect before too long, we will see that yellow line cross below the blue line, for an expectation of an actual year-over-year earnings decline. That's in keeping with our expectation of best-case scenario being probably continuation of what we've been calling a rolling recession, pockets of the economy getting hit at different times. If it were to morph into a more traditional recession where most pockets in the economy are weak, I would expect the trajectory for earnings to be even worse. But for now, I think the path of least resistance is lower, at least for the first half of the year.

So continue to buckle up, expect some volatility, especially during earning season that we sit in. And as always, thanks for tuning in.

[Disclosures and Definitions are displayed]

We believe the information obtained from third-party sources to be reliable, but neither Schwab nor its affiliates guarantee its accuracy, timeliness, or completeness. The views, opinions and estimates herein are as of the date of the material and are subject to change without notice at any time in reaction to shifting market conditions. Supporting documentation for any claims or statistical information is available upon request.

Examples provided are for illustrative purposes only and not intended to be reflective of results you should expect to attain.

Performance may be affected by risks associated with non-diversification, including investments in specific countries or sectors. Additional risks may also include, but are not limited to, investments in foreign securities, especially emerging markets, real estate investment trusts (REITs), fixed income and small capitalization securities. Each individual investor should consider these risks carefully before investing in a particular security or strategy.

Indexes are unmanaged, do not incur management fees, costs and expenses (or "transaction fees or other related expenses"), and cannot be invested in directly. For more information on indexes please see www.schwab.com/indexdefinitions.