Growth vs. Value: What Does It Mean?

August 31, 2022 Liz Ann SondersKevin Gordon
Performance underneath the surface is sometimes markedly different from the action at the Growth and Value index level. 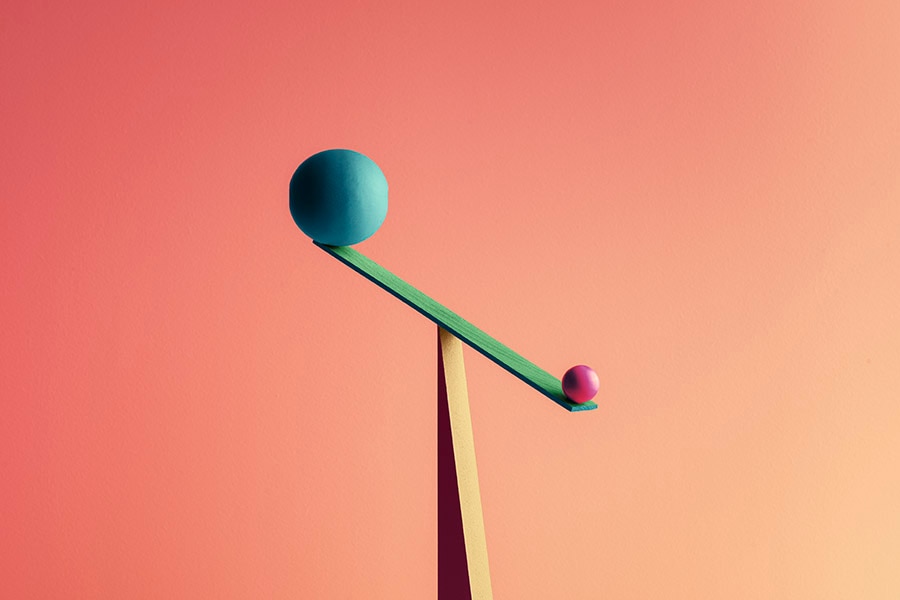 There are often several narratives on which debates in the stock market are centered: cyclical vs. defensive; small caps vs. large caps; U.S. vs. non-U.S.; developed vs. emerging markets. One of the oldest is that of growth vs. value.

Investors often ask us why our tactical recommendations don't include growth and value, the way they do large- and small-capitalization stocks. The simple answer—which we'll discuss more below—is that there are often major differences when it comes to the indexes associated with Growth and Value (uppercase G and V) and the factors/characteristics of growth and value (lowercase g and v), such as stronger long-term earnings growth and high free cash flow yield, respectively.

Starting with the Russell family of indexes, you can see in the chart below that performance has looked markedly different when comparing large caps vs. small caps. Whereas Russell 1000 Growth has outperformed Russell 1000 Value by nearly 3,000% since the indexes' inception in the late 1970s, Russell 2000 Growth has lagged Russell 2000 Value by 2,000% over the same timeframe.

In keeping with the theme of large caps' dominance, you can see in the next chart that S&P 500 Growth has outperformed S&P 500 Value by nearly 500% since 1995 (the inception of the latter index)—a decline from the peak of more than 700% but still a strong spread over the long term.

As is the case with Growth vs. Value in general, much of the glaring performance gap between the Russell 1000 and 2000 indexes can be explained by sector moves and weights. As shown in the following set of charts, S&P 500 Growth and Russell 1000 Growth are dominated by the Information Technology (Tech) and Consumer Discretionary sectors, while S&P 500 Value and Russell 1000 Value are dominated by Financials and Health Care. Specifically, Russell 2000 Growth is heavily influenced by Health Care and Tech, while Financials are by far the largest weight in Russell 2000 Value.

Sector weights are based on iShares ETFs and are shown for informational purposes only.

Tech's weight alone in both large-cap Growth indexes helps to explain why Russell 2000 Growth has lagged over the decades—as Tech has been the top-performing sector since March 2009. It also supports the notion that Growth and Value index swings are often highly dependent on sector moves. Given that Tech and Consumer Discretionary make up more than 60% of S&P 500 Growth, their performance heavily biases the index's moves.

It's not what you think

Yet, if we peel back a layer of the index onion and assess the number of members with growth and value characteristics, the picture looks different. As shown below, the number of stocks exhibiting a standard growth characteristic of five-year average sales growth above 15% amounts to slightly more than 100, which is largely unchanged from 2014 levels. Conversely, there are more than 440 stocks in the S&P 500 Value index, but only 72 that have a standard value characteristic of price-to-sales below 1.0. Suddenly, value now looks to be the scarcer style.

Performance not only comes down to which sectors are biasing the respective indexes higher or lower; it stems from how many stocks are reflecting actual characteristics of growth and value. Hence, market calls for overweighting growth vs. value (or vice-versa) cannot be looked at simplistically through the index lens. Performance underneath the surface is sometimes markedly different from the action at the index level.

A prime historical example that puts the above information to work is the implosion of the tech bubble that brought the equity market down in the early 2000s. The aftermath of the bubble's bursting led to a 57% decline in the S&P 500, a 78% decline in the Nasdaq, and an 83% decline in the tech-heavier Nasdaq 100—culminating in the crescendo low in October 2002.

For investors who were on the hunt for deep value, the clear play from a factor perspective was the beaten-up Tech stocks. Many of the hardest-hit names were indeed trading at deeply undervalued prices, but were still "housed" in the Growth indexes. In fact, at the market's bottom in October 2002, the forward price-to earnings (P/E) ratio1 of the Tech stocks within the S&P Growth index was 20.5—significantly lower than the 25.6 forward P/E of the Tech stocks within the S&P Value index. In other words, many of the cheapest Tech names were actually found in the Growth index.

Not only did the classification detail matter for finding actual value, it mattered for forward performance. Looking specifically at the biggest casualty in that era, the Nasdaq 100, its members with lower multiples tended to fare better as the new bull market commenced.

At the October 2002 low, the median Nasdaq 100 member's forward P/E was 22.6. Those stocks with forward P/E of less than 22.6 (shown in the blue line the chart below) outperformed the cohort with forward P/E greater than 22.6 (the yellow line) by an average of nearly 200% in the ensuing decade. Thus, screening for the simple value characteristic of a less-expensive forward P/E yielded stronger returns—even in a heavily growth-oriented index.

Another example to consider is the Global Financial Crisis (GFC) era. At the overall stock market low in March 2009, Financials (the worst-performing sector during the crisis) had become a deep value play given the sector had fallen 83% from its pre-GFC peak. Indeed, the forward P/E of Financials within the S&P Value index (8.7) was less than that in the S&P Growth index (10.8), but there were inconsistencies within other sectors:

Put another way, many of the less expensive (or value-oriented) members in the REITs, Consumer Discretionary, and Tech areas were housed in the S&P Growth index, not in the S&P Value index—so investors didn't receive much value at all if they blindly bought a Value index without looking specifically for value.

Applying factors in the current environment

The moves underneath the stock market's surface have been nothing short of treacherous over the past year—particularly in 2022 as the S&P 500, Russell 2000, and Nasdaq have plunged into bear market territory (defined as a drop of at least 20% from a peak). Rampant and massive shifts in sector leadership on a monthly, weekly, and even daily basis have made sector positioning over the short term an uncomfortable exercise. As such, assessing the direction of Growth and Value performance has been equally as difficult and head-spinning.

Navigating the landscape from a factor-based approach has yielded less choppiness and more consistency, even in sectors that may not be considered growth- or value-oriented. For example, value factors have performed quite well in the growth-oriented Tech sector. As you can see in the chart below, within the Tech sector, the value factor of high free cash flow yield has outperformed the growth factor of long-term estimated earnings growth by a wide margin since the beginning of 2021 (though we have seen a convergence of the past couple of months).

Factors based on sector-neutral S&P 500. Free cash flow yield is defined as the last twelve months of free cash flow divided by the share price. Long-term growth is defined as mean estimated five-year earnings per share growth. Past performance is no guarantee of future.

Looked at a different way, in a sector like Utilities (which can often be considered a "value trap" given that the sector's forward P/E is greater than that of the S&P 500), until April 2022, neither the free cash flow yield nor long-term growth factor has offered a performance edge over the same timeframe. Only in the market's rout since April has long term growth started to provide a bit more of a performance edge.

Not much utility from Utilities

Factors based on sector-neutral S&P 500. Free cash flow yield is defined as the last twelve months of free cash flow divided by the share price. Long-term growth is defined as mean estimated five-year earnings per share growth. Past performance is no guarantee of future results.

This is perhaps the essence of the growth vs. value debate. In a sector (Tech) that is generally dominated by members with cash flows expected much later in the future—and thus more adversely affected by a rising rate environment (in which we find ourselves today)—members that exhibit high-quality value are outperforming those that screen well on more pure growth factors. Conversely, in a sector like Utilities, which has a larger weight in Value indexes, value and growth factors have essentially matched each other's performance and declined in tandem; and in the latest bout of market weakness, the growth-oriented factor of long term growth is outperforming.

Adopting a position on growth and value is a nuanced undertaking, especially at extremes in the market. Given the lagged and infrequent rebalancing of traditional Growth and Value indices, swift changes in sector leadership, and various definitions of pure growth and value characteristics, taking a stance on one style over the other cannot be done using a broad-based approach. We encourage investors to take more of a factor-based approach, given there are often important differences in the performance and construction of Growth and Value indexes vs. the factors/characteristics of growth and value. In essence, it pays to know what you're buying.

1 The forward price-to-earnings (P/E) ratio is a measure of valuation. It divides the current market value of a stock, group of stocks or index by the estimated earnings per share of the related company or companies for the next 12 months. Liz Ann Sonders shares her perspective on the U.S. stock market and economy in this monthly Market Snapshot video.

The Reserve Bank of Australia (RBA) was next-up with its interest rate announcement and as expected, hiked the Official Cash Rate (OCR) by 25 basis points to 3.35% on Tuesday.

The S&P 500 Growth index constituents are drawn from the S&P 500. Growth stocks are measured using three factors: sales growth, the ratio of earnings change to price, and momentum.

The S&P 500 Value index constituents are drawn from the S&P 500. Value stocks are measured using three factors: the ratios of book value, earnings, and sales to price.

Performance may be affected by risks associated with non‐diversification, including investments in specific countries or sectors. Additional risks may also include, but are not limited to, investments in foreign securities, especially emerging markets, real estate investment trusts (REITs), fixed income, small capitalization securities and commodities. Each individual investor should consider these risks carefully before investing in a particular security or strategy.