Are Jobs Livin' on the Edge?

September 6, 2022 Liz Ann SondersKevin Gordon
The August jobs report delivered something for both economic bulls and bears, but what matters more in the near term is the Fed's focus on seeing a continued easing in labor demand. 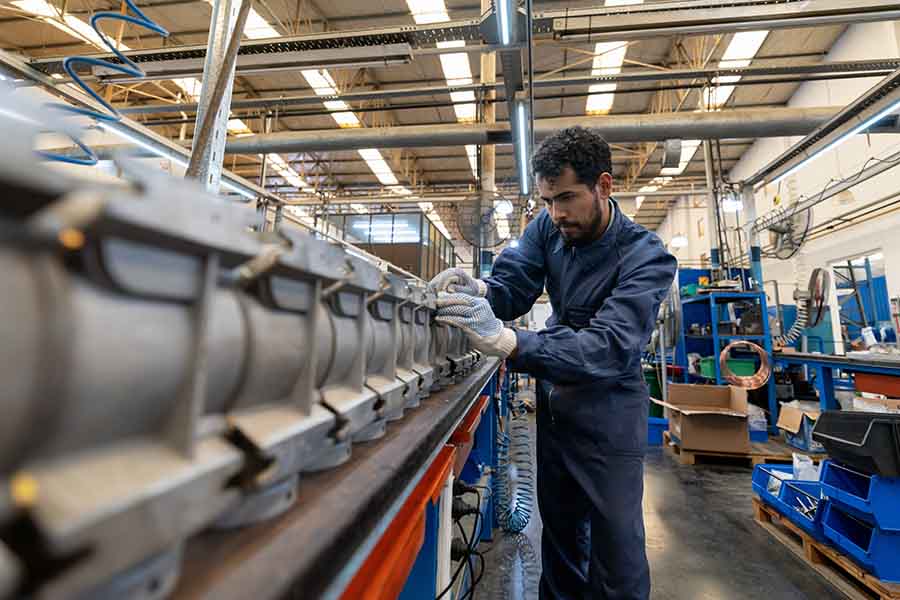 In this current (unique) cycle, the labor market is perhaps the best one to capture the good news is bad news mantra that has developed since the Federal Reserve (Fed) embarked on its rate-hiking cycle. From the perspective of policymakers, weaker labor data (bad news for workers) is a welcome development, as that would theoretically produce some slack, lead to less-hot wage growth, and ultimately help bring demand back into balance with supply. As such, persistently strong labor data (be it faster wage growth and/or stronger demand for labor, both of which are good for workers) is seen as bad news in the eyes of investors, as that would all but guarantee the Fed must keep pressing harder on the brakes.

Goldilocks jobs report, or less than meets the eye?

The August jobs report, released last Friday, was billed as somewhat-Goldilocks (not too hot, not too cold). Nonfarm payrolls increased by 315k, as shown via the blue bars in the chart below, which was slightly higher than consensus expectations. However, there were downward revisions to the prior two months totaling 107k, the bulk of which was for June's data.

For what it's worth, it's decidedly uncommon to get large downward revisions during periods of strong job growth. The revision lower between the second and third "prints" for June was the largest since March 2020—which in turn was the largest since the start of the financial crisis in September 2008. Given downward revisions, the six-month average gain in payrolls has dropped from nearly 600k earlier in the year to 381k as of August. The household survey, from which the unemployment rate is calculated, showed a stronger gain of 442k jobs, as shown via the orange bars in the chart below.

Payroll gains among economic sectors narrowed a bit in August, as shown in the second chart below. The diffusion index (measures the breadth of gains across sectors), shown in the first chart below, continues to deteriorate. It has fallen from a recent high of 80% to 62.1% in August, its lowest since January 2021 and well below its 12-month average.

In particular, leisure and hospitality added only 31k jobs, shown below, which was the fewest since December 2020—with broader services payrolls growth also below recent trends.

As shown in the markers on the "competing" employment surveys chart above, there is a large difference between the "establishment" survey (of businesses done by the Bureau of Labor Statistics) and the household survey in terms of cumulative gains over the past six months. There is an important distinction between the two surveys. Per the St. Louis Fed: "The household survey has no duplication of individuals, because they are counted only once, even if they hold more than one job. In the establishment (payroll) survey, employees working at more than one job, and thus on more than one payroll, are counted separately for each appearance."

In the lead-in and/or early stages of economic downturns, the household survey has tended to provide a more accurate reflection of labor market health. In fact, household employment led payrolls down in three of the past four recessions (hat tip: Piper Sandler Cornerstone), with the mild/short recession of 2001 the exception. As noted above, and as shown in the chart below, household employment did reaccelerate; however, multiple job holders as a percentage of household employment are up markedly since the onset of the pandemic. In addition, full-time jobs fell by 242k in August, the third straight decline (for a total of 465k over that period).

Unemployment up for "good" reason

On the surface it appeared that the jump in the unemployment rate from 3.5% to 3.7% was bad news. But it was for a "good" reason in that the labor force participation rate increased by 786k, including an important surge in prime-age participation, which is just shy of its pre-pandemic peak. Both rates are shown below.

In terms of wages in August, average hourly earnings rose 0.3% month/month and 5.2% year/year, shown in the chart below. In terms of the latter, that growth is still below the rate of inflation, so real wage growth remains negative. In addition, hours worked—a leading labor market indicator—continued its slide (flat-to-down for most of the past six months). At 34.5 hours, it is tied with the lowest reading since April 2020. As my friend and economist David Rosenberg notes, the compression in hours worked in August translates to an equivalent of -150k payrolls on the month. At the same time, those working part-time for economic reasons—a historically reliable contra-cyclical indicator—jumped 225k, on top of +303k in July.

The Federal Reserve has been quite vocal about its intention to loosen the labor market in order to bring inflation down. Notwithstanding the lower trend in payroll growth, the Fed still sees its mission as being far from accomplished, although there has certainly been some progress across certain metrics. Job openings have rolled over from their peak. In July, the Bureau of Labor Statistics (BLS) reported 11.24 million open positions, down from the all-time high of 11.86 million in March. The rub with July's print is that economists were collectively looking for a continued deceleration in open positions, which would confirm that the Fed's tighter policies were working in bringing companies' demand for labor down. We'll know later whether that was a temporary blip.

The good news for now is that the trend in the job postings has normalized. Shown in the chart below is the six-month average of the monthly change in the job openings rate. Even though the downtrend was halted in July, it's clear that they are well off the hot streak during the initial recovery phase of the pandemic.

Confirming the move lower in job openings has been an increase in job cut announcements over the past few months. As shown in the chart below, companies' announcements of layoffs picked up by 30% in August. While that is down from the prior month's 36% increase, it's the third consecutive month in which layoff announcements were up year-over-year, which hasn't happened since the end of 2021.

The swift shift in trend (even this year alone) has been indicative of a decisive move by companies to start shedding labor. Thus far, the technology sector has taken the largest hit with more than 14k announcements this year, up 70% from the number of cuts announced through the same period last year.

When bad news is actually bad

Even though the market may cheer weaker labor data in the near term—in hopes for an eventual easing in aggressive monetary policy—there will come a point at which poor data won't be celebrated. One metric to watch, given its status as a leading labor market indicator, is initial jobless claims. The bad news is that claims (using a four-week average) are up by more than 40% from their recent trough in April. Going back in history, the average increase from a pre-recession trough to the start of a recession is just 20%.

For now, the good news is that workers filing for unemployment insurance have only had to stay on it for a relatively short time. Continuing jobless claims, which capture a broader swath of individuals who file for unemployment over a longer timeframe, haven't climbed at as fast of a rate. Shown in the chart below is the ratio of initial to continuing claims. As is the case today, the increasing trend indicates workers (in an aggregate sense) are finding new jobs relatively quickly. That certainly makes sense and checks out given Friday's jobs report. When the ratio turns, though, we'll know that workers are becoming less successful in their job hunt.

The other bad news to watch out for is the continued fallout in productivity and spike in unit labor costs. Amidst a slowdown in economic growth this year, companies have continued to hire at a relatively strong pace. That has resulted in a toxic combination shown in the chart below. In the second quarter of this year, productivity plunged by 2.4% year-over-year, which was the worst drop in the data going back to 1948. Unit labor costs soared by 9.3% year-over-year, the fastest increase since 1982.

All cost, no productivity

The trajectory of unit labor costs is worrisome given their strong correlation with the Consumer Price Index (CPI), given they indicate that companies have hired more and upped the pace of wage growth. From the Fed's perspective, that dynamic has the potential to keep inflation expectations elevated. Thus, higher labor costs are a target, which means their turn lower will likely coincide with lower inflation. That bodes poorly for virtually every pocket of the economy: fading pricing power (and corporate profits) for businesses as rates rise; weaker wage growth for workers; and a potential increase in layoffs. That doesn't have to translate into a recession, but it's a tough balance to strike.

The Fed's hope is that the trends in job openings and layoff announcements don't translate into material weakness in payrolls or unemployment. In other words, the goal is to crush job openings without sparking a sustainable move higher in the unemployment rate. In an environment of higher inflation, fading profit margins (for certain sectors, especially those in the stay-at-home camp), and rising interest rates, we think the margin for success continues to fade. If not because of the uncharted territory in which we find ourselves, then certainly because of the Fed's increasingly clear admission that substantial weakness in the economy (otherwise known as a recession) may be the expense for a return to an acceptable rate of inflation. 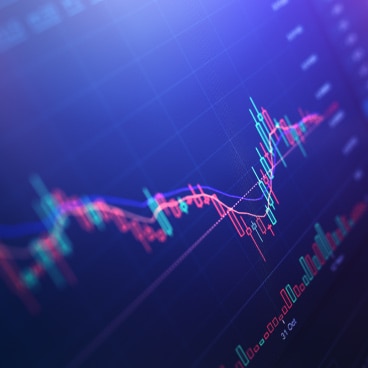 What's the VVIX, and Why Does It Matter?

The volatility of volatility, or VVIX, can be helpful to add to your watchlist. Learn how the VVIX can help inform strategy decisions in VIX options.

Diversification strategies cannot ensure a profit or protect against a loss in any given market environment.

Source: Bloomberg Index Services Limited. BLOOMBERG® is a trademark and service mark of Bloomberg Finance L.P. and its affiliates (collectively "Bloomberg"). Bloomberg or Bloomberg's licensors own all proprietary rights in the Bloomberg Indices. Neither Bloomberg nor Bloomberg's licensors approves or endorses this material, or guarantees the accuracy or completeness of any information herein, or makes any warranty, express or implied, as to the results to be obtained therefrom and, to the maximum extent allowed by law, neither shall have any liability or responsibility for injury or damages arising in connection therewith