Will Shortages Lead to Gluts?

November 8, 2021 Jeffrey Kleintop
After a year of supply shortages, the global economy may be closer to the end of the supply chain problems than the beginning. A surplus of goods and materials seems a long way off at the present. Supply shortages, lifting inflation and slowing production, endured all year as strong demand outstripped supply and have been worsened by supply chain logjams.

Yet, history shows us that shortages often lead to gluts. Should a supply glut emerge in 2022, it may lead to a fall in inflation as excess inventory prompts price cuts. This complicates central bankers' tasks and helps explain their very slow steps towards ending pandemic-era policies. If they view the shortages as transitory, they want to be careful when raising interest rates to cool inflation pressures as a potential glut of supply also may begin to weigh on prices in the year ahead.

From boom to bust

The speed at which shortages can turn into gluts can be rapid, as seen in last year's share price and earnings estimates for the world's biggest maker of disposable gloves. The pandemic created a shortage of personal protection equipment (PPE) in the first half of 2020; Malaysia's Top Glove, the world's biggest maker of rubber gloves, saw its earnings prospects and stock price soar. Analysts' earnings estimates jumped by 1400% and the stock price rose by over 400%. By mid-year, production had caught up. By the time vaccines were announced in the fourth quarter, customer inventories were overstocked. As demand began to return to normal, earnings forecasts plunged, resulting in the stock giving up nearly all of its gains. 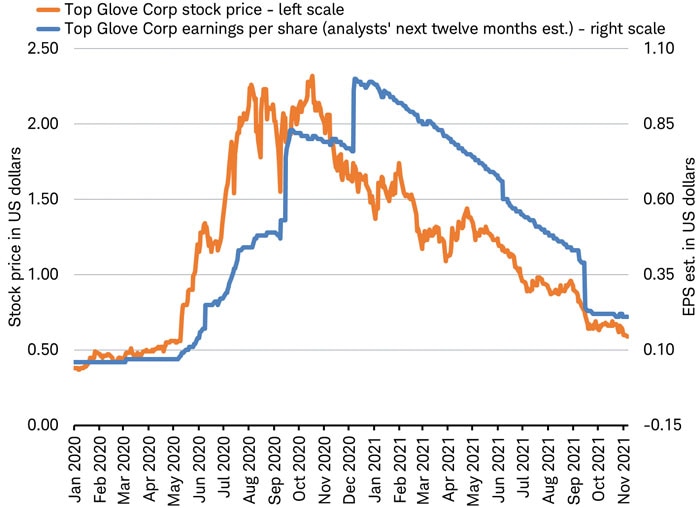 In 2021, we have seen that boom-and-bust pattern play out again, this time in the coal market. Widespread coal shortages, especially in China, drove up the price of coal futures and the stock prices of mining companies for much of this year. In October, China responded by announcing measures to increase coal production, including approvals for new mines, in an all-out effort to boost supply. These actions led to a crash in coal prices that brought down the stocks of mining companies at the same time.

Closer to the end than beginning

In the past, the markets seem to have moved suddenly from a shortage to a glut. After a year of supply shortages, we may be closer to the end of the supply chain problems than the beginning. As a leading economic indicator, markets tend to look six-to-twelve months ahead; they may soon begin to consider the possibility that some shortages may have started to ease, and gluts may have started to form by the second half of next year. Should a glut begin to emerge by late next year, manufacturing inputs like semiconductors, finished goods such as cars and phones, and even containerships themselves may see supply outrun demand. 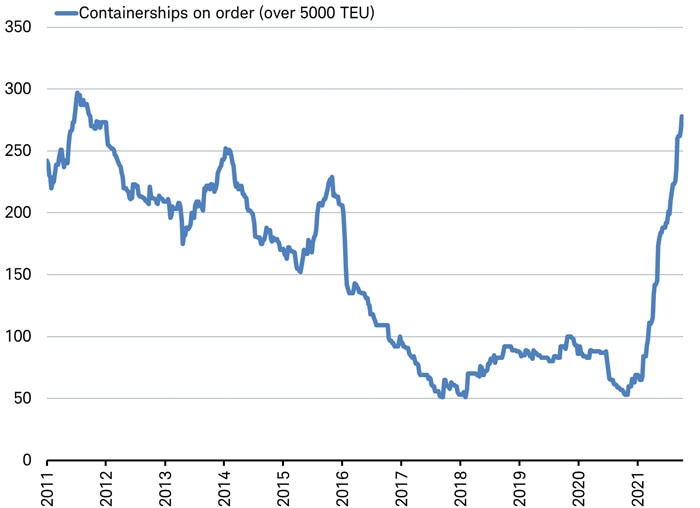 Before falling sales numbers are reported, inventories begin to build up—so that is an important thing to watch for signs of investor risk. Stocks tend to react at the first sign of inventory building which we believe is unlikely to happen until sometime next year. Perhaps excess inventory is sitting at ports right now or, more likely, on order books (there may be some over-ordering taking place). While shortages can create problems, gluts can be worse. The risk of a supply glut in 2022 pulling down stock prices and depressing inflation could be one of the biggest risks for investors.

Looking to the Futures: Live Cattle Rallies on Inventory Report

All corporate names and market data shown above are for illustrative purposes only and are not a recommendation, offer to sell, or a solicitation of an offer to buy any security. Supporting documentation for any claims or statistical information is available upon request.

Indexes are unmanaged, do not incur management fees, costs and expenses, and cannot be invested in directly. For additional information, please see www.schwab.com/indexdefinitions.