The Strong Dollar: Can It Continue?

August 4, 2022 Kathy Jones
A trifecta of factors support the dollar, including the relatively strong performance of the U.S. economy, tightening monetary policy by the Federal Reserve, and safe-haven buying. These are likely to remain intact into 2023. 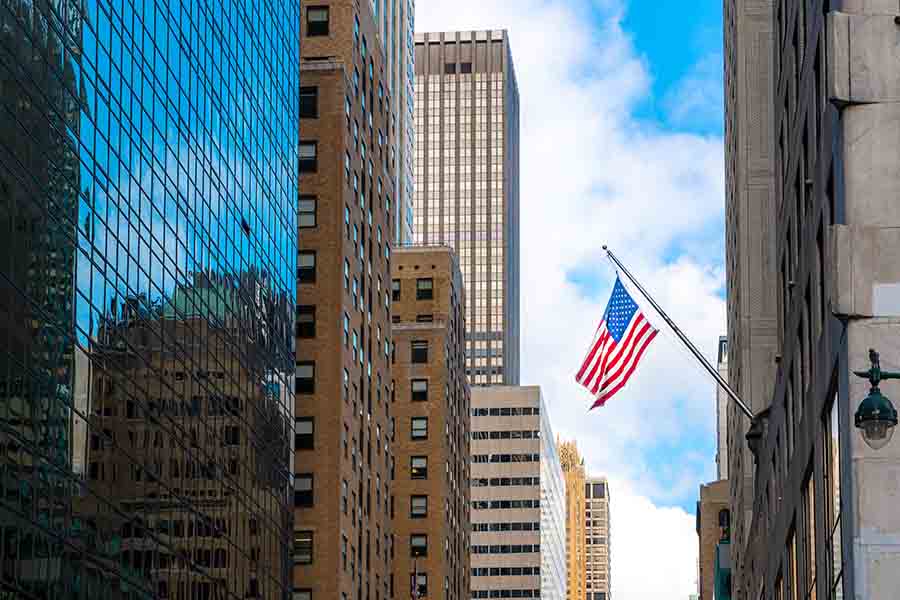 The U.S. dollar has risen sharply off its May 2021 low, posting a 14% gain (at its recent peak) against a broad basket of currencies. It now stands near its highest levels in decades versus major currencies like the euro, the British pound and Japanese yen.

The dollar has posted a sharp rise since mid-2021

Bloomberg Dollar Spot Index (BBDXY Index). Daily data as of 8/3/2022, 3:25pm ET. Past performance is no guarantee of future results.

Some major currencies—such as the Japanese yen, Swedish krona, euro and British pound—have declined precipitously against the dollar over the past year.

Meanwhile, many emerging-market currencies have plummeted versus the dollar—some to all-time lows.

Emerging-market currencies have plummeted vs. the dollar

We've long been dollar bulls, but after such steep gains, we see some scope for a near-term decline and slower pace of appreciation due to slowing U.S. economic growth. Nonetheless, we look for dollar strength to continue longer term. A trifecta of factors support the dollar—the relatively strong performance of the U.S. economy, tightening monetary policy by the Federal Reserve, and safe-haven buying. These look likely to remain intact into 2023. Moreover, there are few attractive alternatives to the U.S. dollar for global investors.

The value of a freely traded currency tends to reflect the prospects for the return on investment in that country's assets. Consequently, strong economic growth tends to produce a rising currency. The U.S. economic recovery, aided by strong fiscal and monetary stimulus, has outpaced recoveries in most other major countries since the pandemic. In nominal terms, U.S. gross domestic product (GDP) now stands 15.6% higher compared to the third quarter of 2019, even after the slight drop in the first half of this year. That compares to the Eurozone's increase of just 8.3% over the same period, while Japan's GDP is 3.6% below its 3Q 2019 level.

Looking forward, the impact of the Russia-Ukraine war is weighing heavily on Europe's outlook, while China's COVID-19-related shutdowns and property market weakness are holding back growth in Asia. Even with the recent weak GDP growth, the U.S. still looks better positioned to weather a global economic slowdown.

Interest rate differentials reflect this relative economic strength, adding to the dollar's appeal. Due to the Federal Reserve's aggressive pace of rate hikes, yields on U.S. Treasuries are significantly higher than in most G-7 countries, aside from a few commodity-producing countries. If the Fed follows through on further rate hikes this year as expected, short-term interest rate differentials will likely widen further as U.S. yields rise more rapidly than yields in other countries.

Currency hedging costs may reduce the attractiveness of U.S. bonds for some foreign investors, but net foreign investment flows into the U.S. continue to be positive and domestic investors have little reason to shift money abroad.

Fed tightening cycles tend to be particularly negative for emerging-market countries. This cycle has been one of the most damaging. Many EM countries and companies issued dollar-denominated debt over the past few years when borrowing costs were low and investors were eager to take risk to get more yield. Today, issuers trying to service that debt with a weaker currency at higher interest rates may struggle, leading to downgrades or defaults.

Not surprisingly, EM bonds—both U.S dollar (USD)-denominated and those issued in local currency—have produced sharply negative returns in the fixed income market over the past year.

EM bond returns have been negative

Bloomberg Emerging Market USD Aggregate Bond Index (EMUSTRUU Index). Total returns based on daily data between 12/31/2020 to 8/2/2022. Total returns assume reinvestment of interest and capital gains. Indexes are unmanaged, do not incur fees or expenses, and cannot be invested in directly. Past performance is no guarantee of future results.

The third factor supporting the dollar is safe-haven inflows. In times of economic and political turmoil, investors historically have moved to the U.S. dollar for safety and liquidity. The U.S. Treasury market is one of the largest and most liquid markets in the world, with strong legal protections, where investors are confident that they can access their money at any time. Inflows have slowed this year, largely because of a drop in holdings by China. However, the overall trend remains firm. Rising short-term Treasury yields make holding dollars intended for safekeeping more attractive.

No alternative to dollar dominance

The dollar is likely to remain the dominant currency in the global economy for the foreseeable future. Despite long-held concerns about swelling U.S. trade and budget deficits, demand for dollars remains strong for global transactions and trade. About 40% of global financial transactions are settled in U.S. dollars and the majority of commodities—from oil to soybeans—are traded in U.S. dollars.1 Importers of those goods need to hold dollars for trade purchases. Exporters tend to hold funds in short-term U.S. Treasuries for future transactions. The size and liquidity of the U.S. Treasury market provides a stable backdrop for global trade and investment.

There simply aren't many alternatives to the dollar that will fill these needs. The euro plays a large role in financial transactions, but its fragmented bond markets and long period of negative interest rates have limited its usage. Japan's zero-interest-rate and yield-curve-control policies make it unappealing. There is always speculation about China's yuan becoming more prominent as a global currency, but it's not even freely convertible due to capital controls.

Implications of a strong dollar

A strong dollar helps hold down domestic inflation, by lowering the cost of imported goods. Every dollar buys more goods and services as it rises. Since the U.S. is a large net importer, a 14% rise in the dollar can have a measurable impact on inflation. A study by the Federal Reserve Bank of Cleveland estimated that a 1% rise in the dollar typically lowers non-petroleum import prices by 0.3% cumulatively over six months. A proportion of that drop passes through to lower overall inflation. It's no surprise that there has been little pushback from the Treasury or the Fed about the dollar's recent sharp appreciation.

For investors, the combination of a rising dollar and high U.S. interest rates make maintaining a globally diversified bond portfolio challenging. The yield to worst on the Bloomberg Global Aggregate ex US Index is only 1.84% with a with a duration of 7.6, compared to a yield of 3.42% for the U.S. Aggregate Bond Index (Agg) with a duration of 6.3. When factoring in the 14% increase in the dollar and the yield differential, the broad international index has dropped 18% over the past year, about twice that of the U.S. index.

Global Agg yield to worst is lower than for the U.S. Agg

Bloomberg U.S. Aggregate Bond Total Return Index and Bloomberg Global Aggregate (x-USD) Total Return Bond Index (LBUSTRUU Index, LG38TRUU Index). Daily data as of 8/3/2022, 3:40pm ET. Yield to worst is a measure of the lowest possible yield that can be received on a bond that fully operates within the terms of its contract without defaulting. Past performance does not guarantee future results.

Emerging-market bonds have also been among the worst performers in the fixed income universe over the past year. Yields are now significantly higher and may provide some opportunities longer term, but an environment of tightening Fed policy, shrinking global liquidity and a rising dollar doesn't tend to favor EM bond returns.

Overall, the factors driving dollar strength look likely to persist into next year. We suggest investors keep allocations to non-U.S. fixed income securities to a minimum.

1 Research has shown that a 1% change in the trade-weighted U.S. dollar index typically lowers nonpetroleum import prices by 0.3% cumulatively over six months, according to the Federal Reserve Bank of Cleveland, "Exchange-rate pass-through and U.S. prices," March 24, 2015.

Commodity-related products carry a high level of risk and are not suitable for all investors. Commodity related products may be extremely volatile, illiquid and can be significantly affected by underlying commodity prices, world events, import controls, worldwide competition, government regulations, and economic conditions.