October 25, 2022 Cooper Howard
Short-term bonds currently offer higher yields than longer-term ones, but there are risks in holding only short-term bonds. These strategies can help buffer the potential downside. Bonds with longer maturities usually yield more than bonds with shorter-term maturities. After all, investors should be better compensated for locking up their money for a longer time. However, that's not the case today, which has caused a lot of investors to say, "why should I buy a longer-term bond when I can get the same yield with a shorter-term one?"

It's a logical question. After all, a six-month Treasury yields about the same as a 20-year Treasury. It may seem counterintuitive, but there are reasons to invest in longer-term bonds even though shorter-term ones may offer better yields. The pitfalls of overconcentration in short-term maturities

Interest rates of all maturities have increased substantially since the beginning of the year, as the Federal Reserve has been aggressively hiking short-term rates in an effort to bring down inflation. The Fed has projected an additional 125 basis points of rate hikes this year, followed by more in 2023 (a basis point is 1/100th of a percentage point, so 125 basis points is equal to 1.25%). If those projections prove accurate, the federal funds rate would rise to nearly 5% by March 2023. It may be tempting to invest in short-term investments while the Fed is hiking rates and plan to invest in longer-term bonds later, after their yields are higher, but there’s a potential downside to this strategy: reinvestment risk.

Reinvestment risk is the risk that when the bond matures, or is called, interest rates may be lower than when you originally bought it, and you may have to reinvest the proceeds at that lower yield. A primary benefit of investing in longer-term bonds is that you’re locking in that yield, and should not be subject to the same degree of reinvestment risk as you would be with short-term bonds.

Not all yields move in tandem with the federal funds rate. As illustrated in the chart below, yields for very short-term bonds, like six-month Treasuries, are highly correlated to the federal funds rate, meaning they tend to move in the same direction at the same time. As the Fed increases rates, short-term rates are very likely to move higher as well. However, longer-term bonds, like the 10-year Treasury, are less influenced by the fed funds rate. Instead, yields for longer-term bonds tend to be more closely tied to prospects for inflation and economic growth. 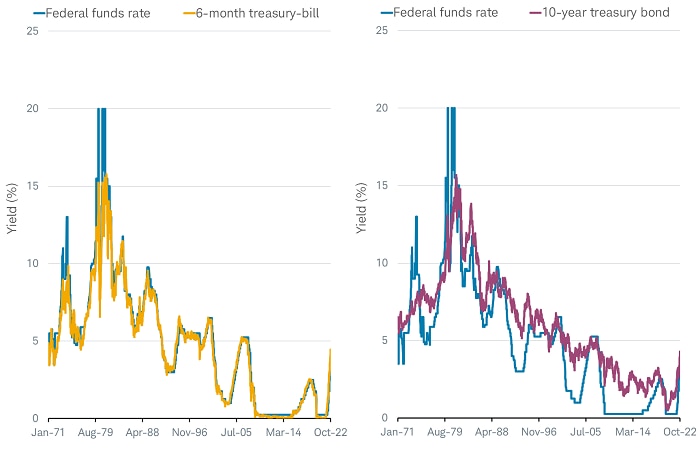 Even though short-term rates may move higher in the very near term, markets expect the Fed to begin cutting interest rates beginning next year, which should cause short-term yields to fall. For example, the consensus estimate for the two-year yield is that it will fall to 3% by the fourth quarter of 2024 based on Bloomberg estimates, down from its current level of above 4.5%.1 If this happens, an investor who invests in a short-term bond today would be faced with having to invest in a lower-yielding security when it comes due. Contrast that with a 10-year Treasury that yields above 4% today.

In addition, the market is forward-looking, and yields likely will change accordingly. Although the Fed is projected to hike rates to roughly 5% next year, market projections are for rate cuts to occur later in 2023. If the outlook for the economy deteriorates or it becomes clearer that rate hikes are causing substantial economic damage and financial instability, the Fed may have to quickly shift gears. We believe we're likely near the peak in longer-term interest rates, so it makes sense for investors to consider modestly extending the average maturities of their bond holdings.

Strategy 1: Barbells provide exposure to both short- and long-term yields

A bond barbell is a tactical strategy that focuses on bonds with two different types of maturities—short-term and longer-term. Today, we prefer maturities of three years or less for the short-term holdings, paired with maturities in the seven- to 10-year area.

By concentrating on a combination of short- and intermediate- or long-term bonds—with nothing in between—the maturity allocation can somewhat resemble a barbell.

A bond barbell can be a good compromise for investors hesitant to move out of short-term investments and into longer-term bonds, as it holds a little of both. The chart below highlights our preferred barbell maturities. Specifically, we prefer investors avoid what’s known as the "belly" of the yield curve, i.e., maturities in the three- to seven-year range. 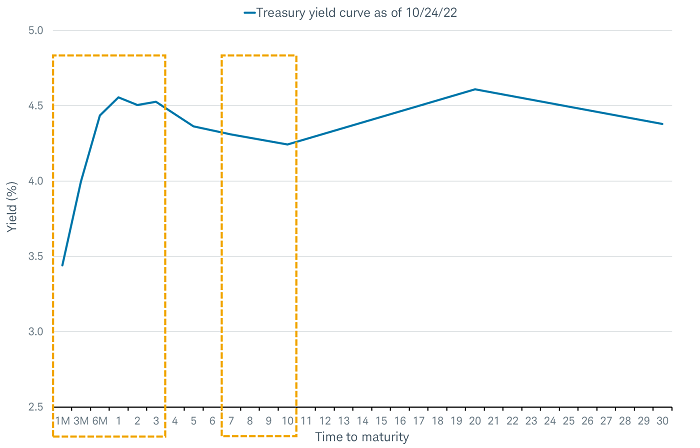 1. Locking in yields. Although short-term bonds can offer higher yields than longer-term bonds, investors should still consider longer-term bonds because rates may fall in the future. For example, the 10-year Treasury is expected to fall to 3.2% in the fourth quarter of 2024, from its current level of roughly 4%. Yields for short-term Treasuries, on the other hand, face elevated reinvestment risk given the potential for the Fed to cut rates in the near term.

2. Diversification benefits. Treasury bills can help provide liquidity and relative price stability, but they won't offer much in terms of price appreciation if yields fall or the stock market declines. All else being equal, bonds with longer maturities are more sensitive to changing interest rates than those with shorter maturities. Because bond prices and yields move in opposite directions, intermediate- and long-term bonds may see larger price increases if bond yields fall due to slower growth concerns or stock market declines.

Historically, longer-term bonds have outperformed after the Fed was done hiking rates 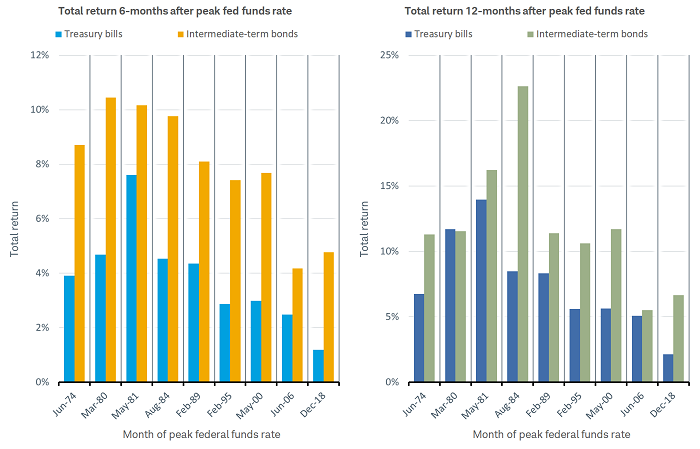 A risk of a barbell strategy, however, is that if interest rates rise, the longer portion of the barbell will likely underperform, as longer-term bonds are more sensitive to fluctuations in interest rates.

A bond ladder is a portfolio of individual bonds with staggered, or "laddered," maturities. While a bond barbell is more of a tactical strategy that may depend on the shape of the yield curve and future Fed policies, a bond ladder is a type of "all-weather" strategy that is meant to help provide predictable income with the flexibility to reinvest bonds as they mature.

A bond ladder is built with two primary goals in mind:

1. Mitigating interest rate risk. By staggering maturity dates, investors avoid getting locked into a single interest rate. For example, say an investor bought a single five-year bond. If interest rates rose two years from then, the bond would still be paying interest at the lower rate.

However, a ladder helps smooth out the effect of fluctuations in interest rates because there are bonds maturing on a regular schedule—potentially every year, quarter, or month, depending on the number of rungs and spacing of the ladder. When a bond matures, an investor could reinvest that principal in a new longer-term bond at the end of a ladder. If bond yields have risen, they’ll benefit from a new, higher interest rate and keep the ladder going. If rates have fallen, they’ll still have higher-yielding bonds in the ladder.

2. Managing cash flow. A bond ladder also helps to manage cash flows for particular needs. For example, because many bonds pay interest twice a year on dates that generally coincide with their maturity date, investors can structure the ladder so that they receive monthly income from the various coupon payments. Bonds in the ladder also mature periodically, and investors can use the proceeds to reinvest into new bonds to extend their ladder or as a source of cash to fund spending.

A bond ladder can help take the guesswork out of bond investing. If they keep the ladder intact by reinvesting the proceeds of maturing bonds to the end of the ladder, investors can ride out any potential movement of interest rates and won’t need to worry about timing the market.

While it can be tempting to focus on very short-term bonds, considering their yields have risen from their near-zero levels of a few years ago, this leaves investors vulnerable to shifts in Fed policy.

Consider gradually extending the average duration of your bond holdings by building a bond barbell or a bond ladder. A barbell can be a good compromise for investors who are reluctant to move out of short-term fixed income securities, while a ladder is a good all-weather strategy that can reduce risk and help manage cash flow whether interest rates are rising or falling.

Stocks Mixed in a Busy Day Full of Economic Reports

A bond ladder, depending on the types and amount of securities within the ladder, may not ensure adequate diversification of your investment portfolio. This potential lack of diversification may result in heightened volatility of the value of your portfolio. As compared to other fixed income products and strategies, engaging in a bond ladder strategy may potentially result in future reinvestment at lower interest rates and may necessitate higher minimum investments to maintain cost-effectiveness.