6 Reasons Munis May Be a Haven in a Recession

August 25, 2022 Cooper Howard
Municipal bonds have characteristics that historically have helped buffer negative performance during recessions. From relatively high and stable ratings to low historical default rates, here are some reasons why recession-wary investors may want to consider municipal bonds. There have been two consecutive quarters of negative gross domestic product (GDP) growth so far this year—a popular, but incorrect, gauge of recession—raising fears that the economy in fact may be sinking into recession.

Recessions are determined by the National Bureau of Economic Research, which looks at more than just GDP growth. Although economic growth has been weak year to date, we don't believe the U.S. economy is in a recession—but the risks are rising. For investors who are concerned about it, municipal bonds can be a potential area to seek shelter if a recession hits. Municipal bonds are issued by cities, states, and local governments and most pay interest income that is exempt from federal and potentially state income taxes.

Below we discuss six reasons why munis may be attractive if there is a recession.

1. An already strong starting point helps buffer the impact of a recession. Nearly 70% of the broad municipal bond index is rated in the top two ratings categories—AAA or AA. This compares to the corporate market where a little over 8% is rated either AAA or AA. Higher-rated issuers, on average, have more stable revenue sources and greater financial flexibility than lower-rated issuers. This can help buffer the negative financial impact of a recession. 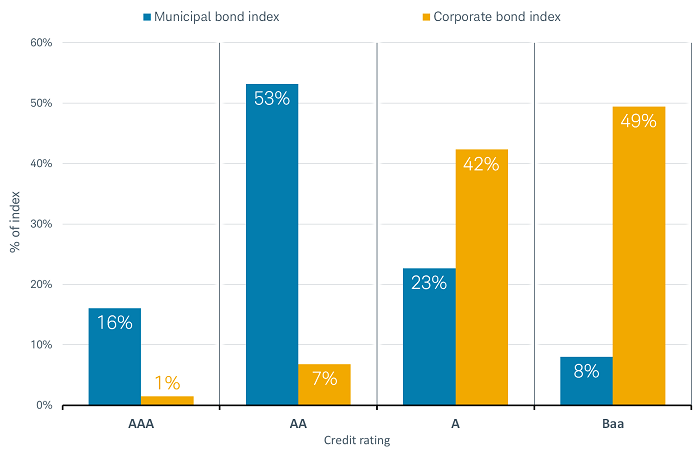 2. The slowdown in tax revenues typically lags the start of a recession. A recession is characterized by a slowdown in consumer spending and an increase in unemployment. This may lead some to believe that at the onset of a recession, tax revenues for state and local governments fall, but this hasn't been the case. Historically, tax revenues have declined following a recession, but the negative impact is usually long after the recession has already started. For example, tax revenues held up during the first few years of the 2007-2008 recession. Revenues didn't start substantially declining until 2010. This long lead time gives state and local governments ample planning time to adjust expenses. 3. Credit quality has been improving. In addition to an already strong starting point, credit conditions in the municipal bond market have been improving. Conditions for most state and local governments are strong, in our view, due to the substantial fiscal support after the start of the COVID-19 crisis. Tax revenues also have been surging, as illustrated in the chart above, which has helped bolster state and local governments' coffers. To illustrate, rainy-day fund balances, which is money that states have set aside and can use during unexpected deficits, are at near-record levels. Even Illinois, the lowest-rated state, has a rainy-day fund balance in excess of $1 billion. That's a substantial improvement from February 2020 when it was only $60,000.

4. Ratings have been stable in past recessions. In past recessions, municipal bonds weren't downgraded to the same degree as corporate bonds. In fact, on average, the ratings for most municipal issuers stayed relatively the same. The ratings drift for municipal bonds is relatively benign when compared to corporate bonds, as illustrated in the chart below. Ratings drift is the average change in credit-rating "notches" for every 100 bonds over the observed one-year period. One "notch", for example, is the incremental difference between AA+ and AA. In other words, in September 2008, the average corporate bond was downgraded 0.7 notches while the average municipal bond's rating was essentially unchanged. This is important because when a bond is downgraded or the market anticipates it may be downgraded, it usually falls in price.

Municipal bond ratings were mostly unchanged in past recessions 5. Defaults are rare. One of the positive factors of municipal bonds is that defaults tend to be rare. This is because many municipal issuers have a monopoly over their services, are backed by stable revenue sources such as taxes, and don't have to compete for "customers" like corporations do. Even when narrowing in on recessionary periods, defaults continue to be rare for munis. For example, during the 2007-2008 recession, only eight issuers that were rated by Moody's Investors Service defaulted in those two years combined. During the recessions that occurred in the '70s and '80s, no muni issuers in this study defaulted. 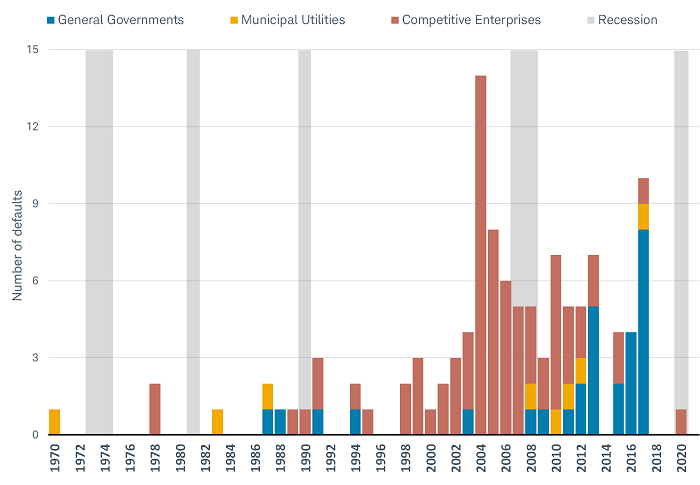 “Competitive enterprises” are considered enterprises that which lack taxation and monopoly powers. According to Moody’s, this group includes not-for-profit enterprises that provide an important public function such as housing, higher education or health care, but do so in a competitive environment. It also includes project financings that can have relatively high enterprise risk, such as deals backed by revenues from sports or convention facilities or start-up transportation ventures.

Narrowing in on the high-yield portion of the muni market, defaults are higher than investment-grade munis but are less frequent than with corporate bonds. At the height of the 2008 credit crisis, more than 13% of the high yield corporate market defaulted, compared with slightly more than 2% of the total high-yield muni market. That's not to say that high-yield municipal bonds are a conservative investment, however, because defaults did start to increase in the years following the recession. 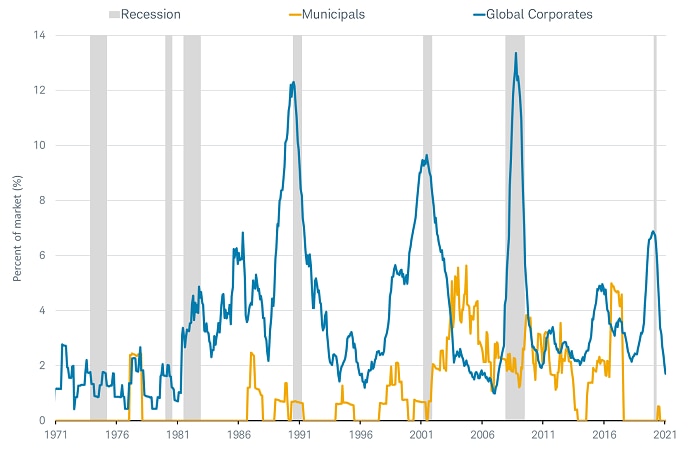 In four of the past five recessions, munis have posted positive total returns over the subsequent 12 months Munis posted positive total returns during the 1990 and 2001 recessions because yields were already moving lower and continued to move lower as investors sought less-volatile investments, like bonds. The 1981 and 2020 recessions were relatively unique. The 1981 recession was characterized by the Federal Reserve aggressively hiking interest rates to squash record-high inflation—a situation that partially mimics the recent environment. The 2020 recession was unique in the sense that in no other time in modern history has a global pandemic caused the entire U.S. economy to come to a screeching halt. It's worth noting that each economic slowdown is unique, and history may not repeat itself when the next recession occurs.

Each recession has been unique

Historically, municipal bonds have been a respite from an economic slowdown. The long lead time between the start of a recession and revenues slowing gives issuers ample opportunity to prepare. This has resulted in fewer ratings changes and defaults relative to corporate bonds. For help selecting the right investment options given your situation, reach out to your Schwab representative.

Find bonds that are right for you.

Use our four-step guide 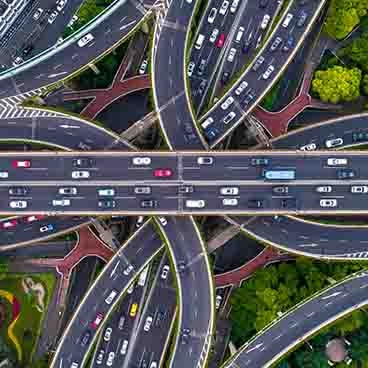 5 Factors to Consider With Taxable Munis

Recent market conditions have made taxable municipal bonds attractive for some investors, as they can offer high yields without much credit risk. 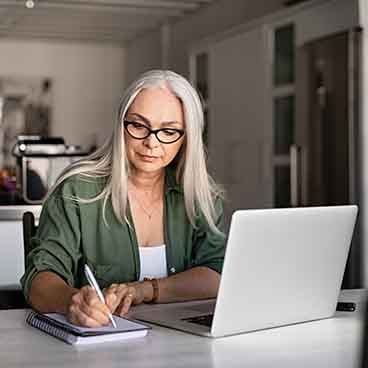 Are Bank Loans Right for You?

In an environment of rising interest rates, bank loans may appear attractive on the surface, but it's important that investors consider three important factors. 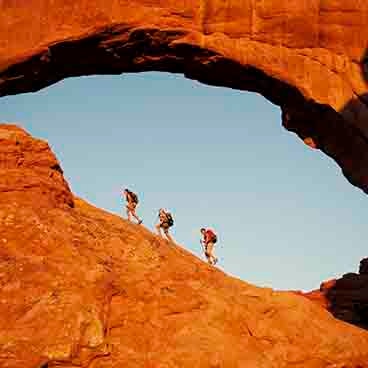 Will anything tempt the Federal Reserve from its aggressive course on interest rates? The odds aren't good.