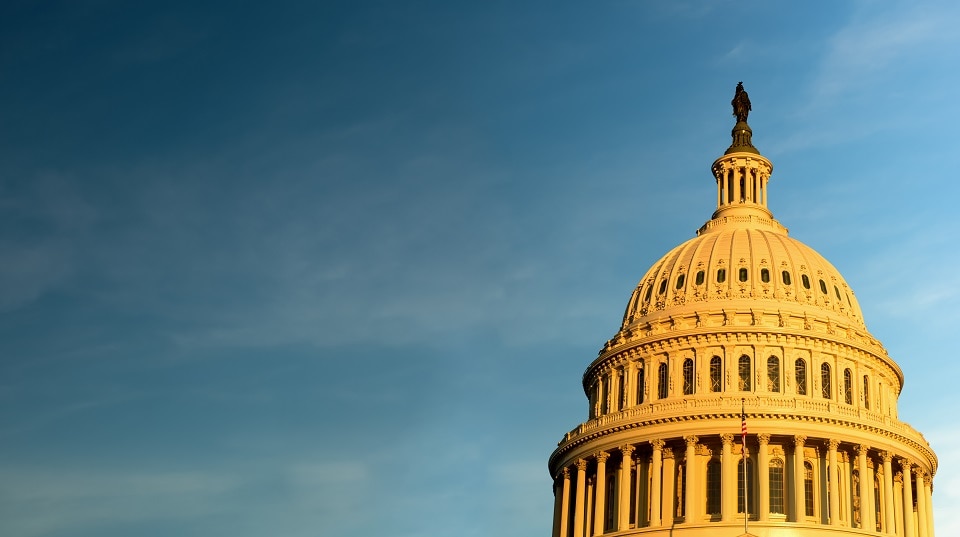 The election analysis provided by Charles Schwab & Co., Inc. does not constitute and should not be interpreted as an endorsement of any candidate or political party.

Election Day 2020 may be in the rear-view mirror, but not everything is resolved. The projected president-elect, Joe Biden, is headed to the White House, pending final vote counts in key states and the disposition of legal challenges. And the balance of power in the Senate rests on a pair of run-off elections in Georgia in early January.

Even as vote counting continues and legal challenges to the election outcome move forward, investor attention is turning back to Capitol Hill, where senators reconvened on Nov. 9 and House members will return on Nov. 16 for what is known as a “lame duck” session of Congress.

“There are important policy issues that haven’t been altered much by  the election outcome, including the Federal Reserve’s monetary policy and antitrust focus on U.S. technology giants, about which there is bipartisan support,” says Schwab Chief Investment Strategist Liz Ann Sonders. “There is also bipartisan support for more fiscal stimulus—however, the two sides remain far apart on the details and a divided Congress may not be able to bridge that divide.”

Debate over another round of coronavirus aid and economic stimulus likely will be at the top of the agenda for the post-election session. After passing four major aid bills totaling about $2.8 trillion in March and April, election-year politics thwarted any further stimulus legislation.

House Speaker Nancy Pelosi (D-Calif.) and Treasury Secretary Steven Mnuchin spent weeks negotiating another round of stimulus earlier this fall, to no avail. The two did narrow the gap between them. House Democrats approved a $3.4 trillion aid package back in May, but Pelosi slimmed that down to about $2.2 trillion prior to the election. The White House, which over the summer had drawn the line at an aid package of about $1 trillion, upped its offer to nearly $1.9 trillion in late October.

Gaps still remain on the details, with the two sides still bickering over how much aid should go to struggling state and local governments, the size of enhanced unemployment benefits, how much should be set aside for virus testing and treatments, and whether to offer liability protection to businesses, among other issues.

And the X factor has always been the Senate, where Republicans will hold a narrow 53-47 majority until the new Congress is sworn in in January. Republicans in that chamber have been mostly on the sidelines of the Pelosi-Mnuchin talks and have consistently voiced opposition to a large aid package.

The hope is that the post-election atmosphere might lend itself to a more compromising spirit on Capitol Hill that could produce a consensus aid bill before the end of the year.

Pelosi said recently that she expected a deal during the post-election session of Congress. Senate Majority Leader Mitch McConnell (R-Ky.), who initially said he did not expect the Senate to take up the issue of more aid until early 2021, changed his tune immediately after the election by saying that he would try to push for a stimulus package during the lame-duck session of Congress.

Further complicating the political calculus on stimulus is the uncertainty over which party will control the Senate in 2021. Republicans are clinging to a narrow majority, but Democrats have the opportunity to forge a 50-50 tie if they can capture the two Georgia seats that will be decided in a pair of Jan. 5 run-off elections. In that scenario, the projected vice president-elect, Kamala Harris, would hold the tie-breaking vote, giving Democrats the narrowest of majorities.

That uncertainty could mean that a stimulus package will have to wait until early in 2021, when there is clarity on Senate control.

Meanwhile, even routine business proved difficult in the run-up to the election. Congress failed to pass even one of the 12 appropriations bills required to fund every federal agency and federal programs for the fiscal year that began Oct. 1. To avoid a government shutdown, Congress approved a deal to fund government operations through December 11. That means that Congress will need to figure out how to fund the government past that date or risk a Dec. 12 shutdown.

There is talk on Capitol Hill of packaging all 12 appropriations bills into a massive piece of legislation and passing that before the Dec. 11 deadline. But that could be overly ambitious. Another temporary agreement to fund the government through early 2021 is a fallback option. In that scenario, the new Congress would need to find a solution for government funding for the remainder of the fiscal year shortly after it convenes.

Other issues to watch

Big tech back in the spotlight: The CEOs of Facebook and Twitter have agreed to testify before the Senate Judiciary Committee on Nov. 17, a kind of post-mortem on how the social media platforms fared around Election Day.

Big tech companies are likely to be in the spotlight often in 2021. The CEOs of Facebook, Google and Twitter testified under subpoena before a Senate committee last week about their content management and perceived biases. House Democrats last month released a 450-page report that is the culmination of a 16-month investigation into the anti-competitive behavior of Amazon, Apple, Facebook and Google. And Google was recently sued by the Justice Dept. over anti-trust issues in its search and advertising businesses.

Both Republicans and Democrats on Capitol Hill have expressed frustration with the companies on a variety of issues, and it seems certain that more scrutiny of these companies is likely in 2021.

Fed meeting in December: The Fed’s Board of Governors will convene for its final meeting of 2020 on Dec. 14 and 15. While no interest rate adjustments are expected, the Fed’s assessment of the current state of the economy will be closely watched by the markets. Fed Chair Jay Powell has been outspoken in recent months about the importance of more fiscal stimulus from Congress; if lawmakers are still fighting over another round of aid, expect Powell to reiterate his strong support for a bill.

“As Powell put it earlier this fall, ‘The Fed can lend, but it can’t spend.’ In other words, the Fed can lower rates and make it easy to borrow, but it can’t increase unemployment compensation or provide direct subsidies to small businesses,” says Schwab Chief Fixed Income Strategist Kathy Jones. “The Fed knows it has pushed the limits of what monetary policy can do, and in lieu of a vaccine or cure for the COVID-19 virus, the economy is likely to struggle—with unemployment staying high.”

That’s not to say the Fed doesn’t have other moves it could make if conditions don’t improve. For example, it could expand its asset purchases or target securities of certain maturities to keep long-term rates down, thereby giving businesses and individuals an incentive to invest and spend. It could also do more to encourage banks to lend more. The current state of the pandemic, economic conditions and the post-election atmosphere will all play into the Fed’s perspective next month.

The markets continue to be confident that more economic stimulus is coming—it’s just a question of whether that comes in the post-election November/December time frame, or early in 2021. But with the timing up in the air, the Fed staring down the limits of its influence, and the future course of interest rates uncertain, what can investors do?

“I would advise thinking longer term rather than focusing on the next few months. If you’re investing for the next five to 10 years and you have a solid financial plan, you may not need to do anything,” Kathy says. “We believe that diversification is going to be more important than ever in the next few years. There is such a wide range of potential outcomes for the economy and for policy that we think it makes sense to have exposure to many asset classes to mitigate some of the risks in the individual investments.”

Given current low interest rates and the low bond yields that go with them, retirees looking for stable income may want to look at other sources of income in addition to interest on bonds.

“One strategy many investors will likely need to consider is using the whole portfolio to generate the cash flow you need for retirement—that would include using capital gains and other sources of income like dividends,” Kathy says.

Randy Frederick, vice president of trading and derivatives at the Schwab Center for Financial Research, also suggests focusing on the long term.

“While it’s unlikely that your investing time horizon will ever be as long as 88 years, consider that since 1932, the S&P 500 has gained an aggregate of 710% under Democratic presidents and 375% under Republican presidents,” Randy says. “But staying invested the entire time would have earned 45,000%—during that period of time, the S&P 500 increased from 7.24 to 3310.11, not including dividends.”