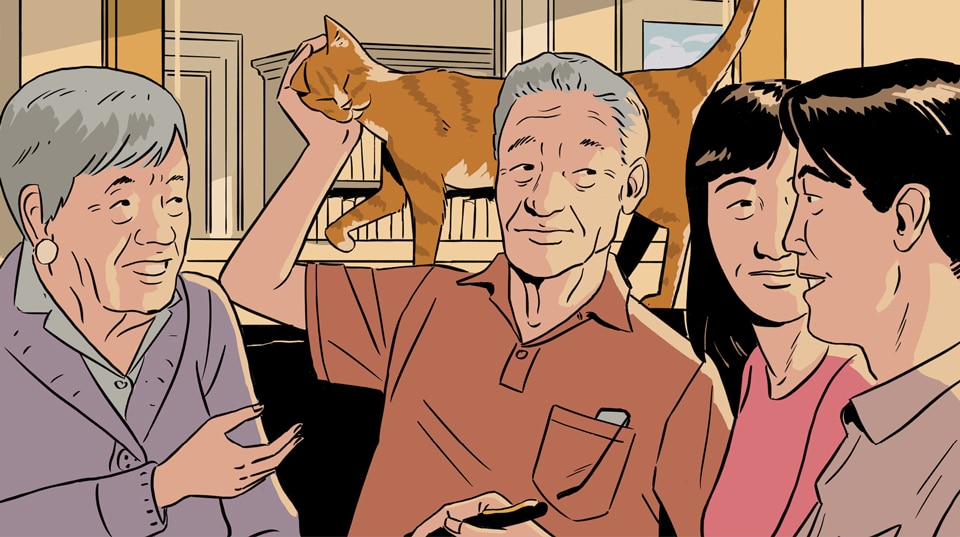 A retired Phoenix couple in their mid-70s thought they were all set. A decade earlier, they’d put together an estate plan and set up a trust for their three children to direct the distribution of their assets. What they didn’t realize was that they were missing a critical next step: communicating those plans to family.

“In the course of discussing the finer points of their estate plan, it came to light that they hadn’t communicated any of their plans to their loved ones,” says Anna Sinatra, a Phoenix-based financial planner in Schwab’s Wealth Strategies Group. “The truth is, these often-overlooked conversations can be as integral to an estate plan’s ultimate success as the legal documents that underpin them.”

“In my experience, the more assets, the more reluctant people are to share information,” adds Mark Porcelli, a Schwab wealth strategist in New York City. “I’ve heard some clients say they don’t want to foster a sense of entitlement, and others who simply want to avoid uncomfortable conversations, like why they decided to leave more to a struggling child rather than an equitable distribution among the beneficiaries.”

Although the families they work with have various reasons for not wanting to have such discussions, Anna, Tate and Mark—with a combined 50 years’ worth of experience helping clients to create and preserve wealth—deliver the same piece of advice: Sharing your estate plan with your heirs, however uncomfortable, can avoid confusion, infighting and, perhaps most of all, mismanagement of your estate and end-of-life care.

“It’s worth the effort”

The key to navigating such conversations, Anna says, is to plan ahead. As you prepare to sit down with loved ones, she suggests thinking through some key questions in advance:

If you’re unable to answer any or all of these questions, make sure to get to the bottom of them before you broach the subject with your family. Some topics—such as unequal inheritances—might be more challenging to address than others, Anna says, so it’s best to start small and work your way up to the potentially thornier subjects.

“It’s a lot to address all at once, so it’s more likely to be successful as a series of conversations,” Anna says. Be that as it may, the sooner you discuss these important issues, the sooner everyone involved can air their concerns, reach consensus and achieve the peace of mind that comes from putting one’s preferences on paper. “As tough as these discussions can be, I’ve found that, by and large, it’s worth the effort,” she says.

Inherent in the questions above is the need for a durable power of attorney, which designates an individual authorized to conduct broad financial and legal affairs on behalf of those no longer capable of doing so themselves.

Once you decide who might be a good fit—it can be a family member or any trusted individual—it’s important to discuss the responsibilities of the role and outline the scope of your financial and legal situation.

“I’ve seen estates where the heirs simply weren’t aware of all the various accounts,” Mark says. “This could result in a longer and more costly estate settlement. Also, assets can go missing, especially when there isn’t a thorough cataloging of a family’s finances.”

Whether or not a family decides to disclose to heirs precisely how much is in each account—or even the overall value of the estate—is beside the point, Mark says. The important thing is to chronicle each asset, have a method for providing access, and, of course, ensure you’ve properly named a beneficiary or beneficiaries for each and every account.

Tate says it can also be helpful to provide a family member with access to a parent’s or grandparent’s accounts to prevent cases of elder fraud. “Numerous times I’ve seen a financial institution thwart a potentially disastrous situation because they were able to reach out to someone with a durable power of attorney who could step in as an advocate for the account holder,” he says. “Having an informed ally can be its own powerful form of protection.”

Whether you have a durable power of attorney or not, Schwab recommends you designate a trusted contact who can answer questions about your account should the firm suspect financial exploitation, diminished capacity or other unusual or suspicious circumstances.

Anna says many of her clients go so far as to establish an advanced health care directive, which states in no uncertain terms what life-saving treatments a person will and will not accept should they become unable to speak for themselves. That said, it’s better to make your power of attorney—and, in turn, your family—aware of your wishes long before the need arises. “I like to think of durable powers of attorney—be they for financial and legal affairs or for health care issues—as advocates,” Anna says. “And the more informed they are, the more effective they can be.”

“A trigger that gets people talking”

In theory, there’s no wrong time to detail your assets to those with a stake in their eventual distribution. But in practice, many procrastinate until unforeseen circumstances spur them to take action. For a client of Tate’s, it was when she was preparing to undergo chemotherapy.

“Usually there’s a trigger that gets people talking,” Tate says. “However, planning your estate under extreme stress isn’t ideal. Such potentially fraught conversations can be complicated enough without adding crisis to the equation.”

What does science say about candid financial talks?

When it comes to scientific research, the verdict is in: Good things come from being more open about your finances. According to one study published in the Journal of Economic Psychology,* students who came from households that spoke openly about finances not only had significantly less credit card debt but also were less likely to succumb to impulse spending. What’s more, joint decision-making can help you become more deliberate and less prone to errors. Those who enlisted a partner or spouse in major financial decisions, for example, were less likely to take unnecessary risks, say researchers at the University of East Anglia†—which can lead to greater wealth preservation.