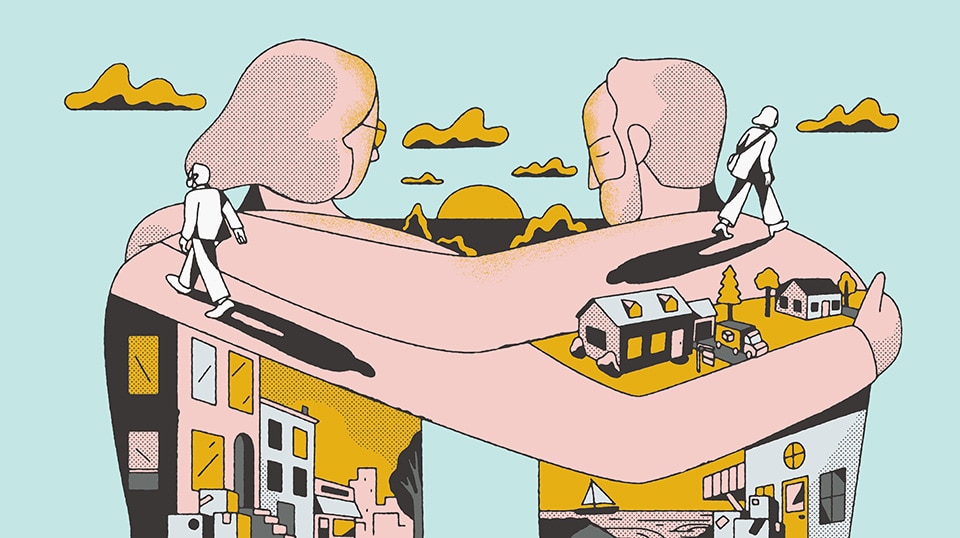 Divorce after 50—the rate of which has doubled since 19901—can have an outsize impact on your financial security. Indeed, parting ways with your spouse can potentially halve your assets while doubling your expenses, which can be especially detrimental when you don’t have decades to regroup and rebuild.

“After a long marriage, there’s a greater likelihood that much of a couple’s wealth resides in assets acquired together over the years,” says Bob Barth, a Schwab wealth strategist based in Orlando, Florida.

How those assets will be divided varies considerably depending on where you live. For example, in the nine community property states—Arizona, California, Idaho, Louisiana, Nevada, New Mexico, Texas, Washington, and Wisconsin—all earnings and everything acquired with those earnings during the marriage are generally divided 50/50. In common law states, on the other hand, marital assets should be divided “equitably,” a standard that gives courts considerable discretion in deciding what’s fair.

Even assets that are understood to be separate—such as certain types of inheritances (see “Whose inheritance is it, anyway?” below)—may still figure into how a court decides who gets what. “You’ll want the help of your financial advisor, an accountant, and a lawyer well-versed in state-specific rules,” Bob says. “Divorce is complicated, and there are a lot of different ways you can approach it.” In addition, these rules are constantly evolving in the law.

For older couples, sources of retirement savings can loom especially large—because of both their size and how soon you’re likely to need them. What’s more, such assets often are governed by their own rules regarding how they can be divvied up. With that in mind, let’s look at three assets of special relevance to later-in-life divorce.

By law, 401(k)s and individual retirement accounts (IRAs) can have only a sole account holder. However, the money that goes into such accounts during a marriage technically belongs to both parties. As part of the divorce settlement, the spouse with a higher balance may need to transfer funds to the other spouse’s account.

In the case of 401(k) funds, both spouses need to file a qualified domestic relations order (QDRO) with a state-level domestic-relations court to spell out how they want the money divided. Each spouse should keep these three things in mind:

QDROs don’t apply to IRA assets. However, a direct rollover from one spouse’s IRA to another spouse’s IRA—again, the most tax-efficient method—can occur only if outlined in the divorce settlement and filed with the plan custodian.

Alternatively, account holders worried about jeopardizing their retirement savings might instead be able to relinquish other assets—a greater stake in the equity of a home or the contents of an investment account, for example—to satisfy their financial obligations to the other spouse.

“Either way, states have a vested interest in seeing that no one comes out of a divorce facing unnecessary financial strain,” Bob says. “So, when a married couple has saved successfully for retirement, those funds are generally used to ensure that both parties end up financially secure.”

The court typically considers a defined-benefit pension that one spouse earned during the marriage as a shared asset, too. “This can become an emotional issue,” Bob cautions. “If one spouse has put in the time to earn a pension, he or she may feel territorial about it.”

As with a 401(k) or an IRA, a qualifying spouse would be entitled to only that portion of the pension earned during the marriage. However, pension plan rules, state laws, and whether a spouse has already begun receiving payments can make divvying up pension assets more complicated than parsing retirement accounts.

If only one spouse has a pension, he or she may wish to offer up other assets of equal value rather than haggle over the pension itself. When both spouses have a pension but they’re of unequal value, the spouse with the larger pension might make up the difference by purchasing a single premium life insurance policy and naming their former spouse as the beneficiary rather than forfeit a portion of his or her pension.

“In both cases, you’re offsetting the amount your ex would have received from your pension with something of equal value,” Bob says.

In contrast to retirement accounts and pensions, which may be subject to a lot of wrangling and compromise, the handling of Social Security benefits in divorce is controlled by law and is rarely open to interpretation. “The Social Security benefit is what it is—though keep in mind it may become part of the larger discussion around who gets what, which can itself be contentious,” Bob says.

If the couple was married for at least 10 years before splitting, the ex-spouse will be eligible to apply for monthly benefits worth up to 50% of the higher earner’s full retirement-age benefit. (If the lower earner remarries, however, he or she forgoes any claim to such benefits in most cases.)

This ex-spousal benefit in no way affects the benefit of the higher-earning spouse—no matter how many times he or she has been married and divorced. “In that respect, this is a rare win-win—an ex-spousal benefit that costs absolutely nothing for the spouse on whom it depends,” Bob says.

Once your divorce is final, you should consider how your new situation impacts your current and future finances. Toward that end, revisit your financial plan to ensure you’re still on track to reach your goals. You should also update your will and account beneficiaries with your new situation in mind.

“Make sure you update your beneficiary designations, in particular, as soon as your divorce is finalized,” Bob says. “If you don’t, you run the risk of leaving additional assets to your ex, as some states don’t automatically nullify such designations after divorce.”

The truth is, most people don’t plan for divorce—especially relatively late in life. But working with a financial advisor before, during, and after your split can help both parties get back on track as quickly as possible. “If you find yourself facing divorce and retirement,” Bob says, “there are definitely concrete steps you can take to limit the impact on your future.”

Whose inheritance is it, anyway?

How to handle an inheritance can be a gray area in a gray divorce.

Even if you live in one of the nine community property states mentioned above, receiving an inheritance during the course of your marriage doesn’t necessarily mean your spouse is entitled to a portion of its value.

If inherited money was specifically bequeathed to one spouse and was never commingled with shared funds, for example, the court might treat it as a separate asset in a divorce. Likewise, an inheritance structured as a trust might fall outside the marriage and be out of reach for the other spouse. Most importantly, remember that divorce courts are courts of “equity.” As such, judges have significant leeway in reaching an equitable result.

On the other hand, if you or your spouse received money from an estate during the marriage and deposited it into a shared account, the funds will most likely be considered marital property. Similarly, if one spouse inherited a house, but the couple fixed it up, rented it, and shared the income, it also may be seen as a joint asset.

“Consult an estate specialist in your home state if you have questions about how to divide an inheritance that occurred during the course of the marriage,” says Bob.