ETFs: How Much Do They Really Cost?

September 9, 2021 Emily Doak
If you're considering investing in ETFs to diversify your portfolio, you'll want to be aware of the additional costs you might incur. 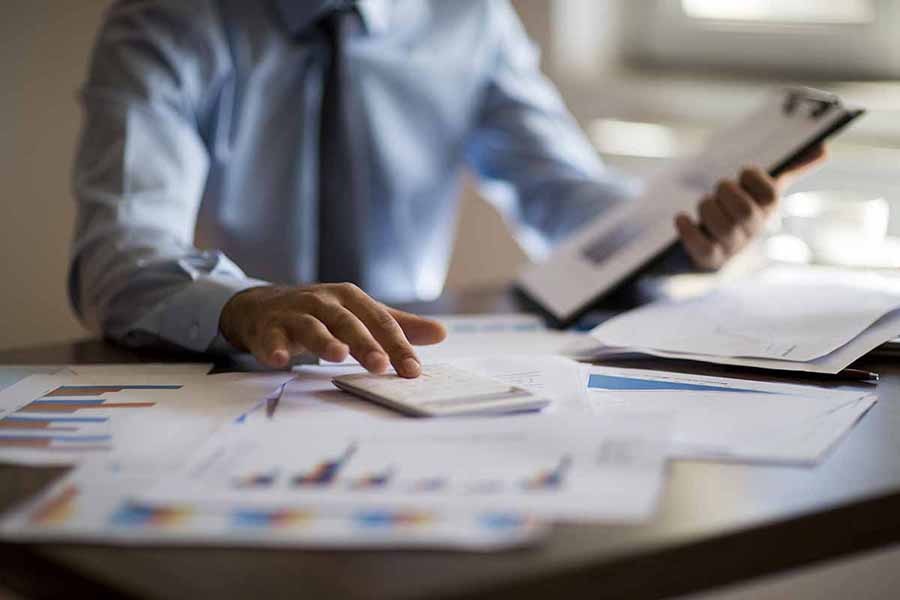 Exchange-traded funds (ETFs) are similar to mutual funds except that they trade intraday like stocks. Even though ETFs can be relatively inexpensive, investing in them does include certain costs.

The most obvious is the operating expense ratio (OER), which is incurred while owning the ETF. However, trading costs are also important: commissions (if applicable), bid/ask spreads, and changes in discounts and premiums to an ETF's net asset value (NAV) will impact the total cost of ownership.

ETFs are popular with investors for a number of reasons, but investors often find the lower operating expenses most appealing. Most ETFs have attractively low expenses compared to actively managed mutual funds and, to a lesser extent, passively managed index mutual funds.

ETF expenses are usually stated in terms of a fund's operating expense ratio (OER). The expense ratio is an annual rate the fund (not your broker) charges on the total assets it holds to pay for portfolio management, administration, and other costs.

As an ongoing expense, the OER is relevant for all investors but particularly for long-term, buy-and-hold investors.

When choosing between two or more ETFs that track the same market index (or similar indexes), be sure to compare their expense ratios among other factors. Several ETF issuers have recently launched lower OER versions of their most popular funds. A little homework might pay off.

Unlike other investments, many investors can trade listed ETFs online commission-free, including at Schwab.1 Thus, commission costs aren't as important of a consideration as they have been in the past. However, you'll still want to check with your broker for commission costs, which can range from $0 to $25 or more (fees are often higher if you place a trade in person or over the phone).

In cases where you pay commissions to trade ETFs, keep these two points in mind:

You can think of the bid/ask spread as a transaction cost similar to commissions except that the spread is built into the market price and is paid on each roundtrip purchase and sale. So, the larger the spread and the more frequently you trade, the more relevant this cost becomes.

The three main factors that drive bid/ask spreads include:

Charles Schwab Investment Advisory, Inc. This example is hypothetical and provided for illustrative purposes only.

At first glance, it would appear that ETF B is less expensive because of its lower expense ratio.

After closer examination of the bid/ask spreads, however, you learn that ETF B has a much larger spread than ETF A. This tells you that in a roundtrip trade, you're estimated to lose more of your investment in ETF B than ETF A because of the difference in spreads.

Despite its higher expense ratio, ETF A looks to have a lower cost assuming you hold each ETF for one year, you pay zero commissions, and all other costs remain constant.

Furthermore, the 0.004% spread of ETF A also indicates that it likely has a higher trade volume than ETF B, which might make ETF A preferable for liquidity reasons as well.

Discounts and premiums to NAV

The last (and possibly least understood) potential cost comes from changes in discounts and premiums to NAV during the period you hold an ETF. This potential cost differs from the others because it can be a positive factor on overall returns—for example, it might increase your return instead of decreasing it.

In general, most ETFs exhibit small discounts and premiums. When material differences do manifest in ETF prices, large institutional investors (called authorized participants) usually help the market self-correct by attempting to profit from arbitrage trades that serve to better align an ETF's market price and NAV.

To illustrate this point, let's assume that an ETF is trading at a premium of 1% to NAV. An authorized participant might attempt to capture that premium by simultaneously purchasing a basket of the underlying securities the ETF tracks, exchanging the basket of securities for shares of the ETF, and selling the shares in the open market.

This process of exchanging baskets of the securities in an index for shares of the ETF is called the in-kind creation/redemption mechanism, and it's the reason ETF premiums and discounts are generally self-correcting.

Deviations from NAV create profit opportunities for authorized participants. As they conduct arbitrage trades, they help bring the ETF's market price into better alignment with its NAV.

In the case of an ETF that trades at a premium, for example, authorized participants selling newly created ETF shares increase the supply in the market, which helps drive down the price of the ETF closer to its NAV.

When the securities that make up the index an ETF tracks are easily priced because many buy and sell orders are being placed in a centralized exchange, "creating" a basket of securities to replicate the index is relatively straightforward.

As a result, ETFs that track heavily traded, highly liquid markets—like U.S. stocks—typically display only small premiums or discounts. A good example of this is an ETF that tracks the S&P 500® and whose market price might not stray more than 0.20% or so away from its NAV.

However, ETFs that track less liquid markets—such as high-yield bonds, commodities, or emerging markets—can display differences of 1% or more, usually due to lack of liquidity but sometimes because of more complex factors.

Remember, the change in discount or premium is what matters most. Moreover, these changes aren't always necessarily a drag on performance—the effect can be either positive or negative depending on which way the discount or premium moves between a purchase and subsequent sale.

For example, if an international fixed-income ETF trades with a somewhat persistent 0.6% premium to NAV, and you bought and sold the ETF at that same premium, your return wouldn't be affected.

Although realizing small gains or losses from potential changes in discounts and premiums might be acceptable in many cases, and possibly even unavoidable for certain ETFs, the main point is to be aware of the risks involved—and to be purposeful when trading ETFs that may exhibit excessively large or volatile discounts and premiums to NAV.

Investors should also be aware that some investment products (such as exchange-traded notes (ETNs) and closed-end funds) also trade intraday like stocks and ETFs. However, because these products lack the complete in-kind creation and redemption process used by ETFs, discounts and premiums may be more problematic.

Your portfolio strategy greatly influences the net effect of commissions, operating expenses, bid/ask spreads, and potential changes in premiums and discounts to NAV.

In the table below, we estimate the hypothetical cost of ownership for a long-term, buy-and-hold investor and an active investor who both invest in the same ETF.

Charles Schwab Investment Advisory, Inc. This example is hypothetical and provided for illustrative purposes only.

The more you trade, the more important commissions and bid/ask spreads become because you pay for each during every roundtrip made. On the other hand, the longer you hold an ETF position, the more important the expense ratio becomes because it's a recurring management fee paid to the fund for as long as you own the ETF.

Discounts and premiums to NAV can either drag or boost performance depending on how they move during the time you hold the ETF.

In conclusion, investors should remember that an ETF's total cost of ownership is a combination of its operating expenses and costs of trading. Your investing strategy as well as the specific ETFs that you select for your portfolio can make a big difference in the total cost.2

1Standard online $0 commission does not apply to over-the-counter (OTC) equities, transaction-fee mutual funds, futures, fixed-income investments, or trades placed directly on a foreign exchange or in the Canadian market. Options trades will be subject to the standard $0.65 per-contract fee. Service charges apply for trades placed through a broker ($25) or by automated phone ($5). Exchange process, ADR, and Stock Borrow fees still apply. See the Charles Schwab Pricing Guide for Individual Investors for full fee and commission schedules.

2There are other potential costs associated with investing in ETFs not specifically discussed, such as the tracking error of the ETF relative to the benchmark and costs related to market impact.

We can help you get started with ETFs. 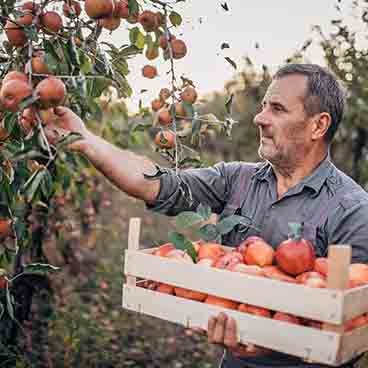 Dividend Stocks: Port in a Storm?

Dividend-paying stocks could potentially pump up total returns from your stock portfolio and generate extra income.

Are Leveraged and Inverse ETPs Too Risky?

Leveraged and inverse ETPs can double or even triple your gains—but also your losses. Here's what to consider before you jump in. 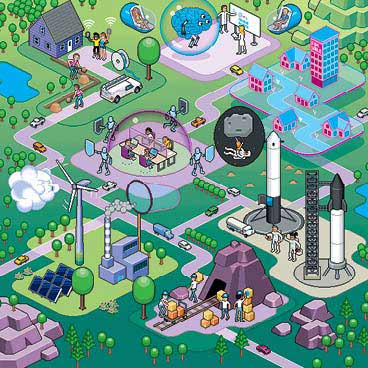 What Trends Could Define the Future of Investing?

How much do you know about tomorrow's potential investment opportunities? Take our seven-question quiz to find out.

Investment returns will fluctuate and are subject to market volatility, so that an investor’s shares, when redeemed or sold, may be worth more or less than their original cost. Unlike mutual funds, shares of ETFs are not individually redeemable directly with the ETF. Shares are bought and sold at market price, which may be higher or lower than the net asset value (NAV).

Standard online $0 commission does not apply to over-the-counter (OTC) equities, transaction-fee mutual funds, futures, fixed-income investments, or trades placed directly on a foreign exchange or in the Canadian market. Options trades will be subject to the standard $0.65 per-contract fee. Service charges apply for trades placed through a broker ($25) or by automated phone ($5). Exchange process, ADR, and Stock Borrow fees still apply. See the Charles Schwab Pricing Guide for Individual Investors for full fee and commission schedules.

All expressions of opinion are subject to change without notice in reaction to shifting market conditions. Examples provided are for illustrative purposes only and are not representative of intended results that a client should expect to achieve. Data contained herein from third-party providers is obtained from what are considered reliable sources. However, its accuracy, completeness or reliability cannot be guaranteed.